We had another wildly fun road trip last weekend for Valentine's Day, this time in Fort Worth. I found a few new good places for beer downtown near our hotel, including Little Red Wasp with it's wonderful selection of brews.. They even had a couple of different beers from one of my favorite (and hard-to-find) breweries, Jester King, so we got to have both Mad Meg and RU55 there right across the street from our hotel, then picked up a bottle of "Das Wunderkin!" elsewhere and drank that liquid love last night at home.

But anyway, despite not getting to several of the breweries we planned to get out to, I did add 3 more breweries to my list for the year; 2 in Fort Worth and 1 in Texarkana, TX on the way down.

Here's where I've been so far in 2015 with newest additions at the bottom:


At Pecan Point Brewing Company I tried the Wavelle Chocolate Rye with a nice burger. The food and beer both were good and our bartender was fantastic and informative. It's a new spot with a whole lot of potential and already the attention to keeping it looking "historic" plus clean and modern made it feel super laid back. Lots of nice woodwork.

In Fort Worth, we wandered a bit from our hotel to the Magnolia area. We found Zio Carlo Magnolia Brewpub, s a cool little pizza pub that reminds me a lot of Vino's. Certainly nothing fancy, a bit of a dive actually, but a cool vibe with some good pie and house brews. I had a Shields Up, a nice lightly hopped, satisfying, crisp American Pale Ale.

Back towards downtown, The Collective Brewing Project was a really cool taproom. Lot of choices of brews and I had their Mustache Rye'd and Funky Pale both while the wife and I played a little Baggo and hung out with the friendly people, watching some play giant (loud) Jenga.

It looks like this excellent video was uploaded to YouTube by user LemkeNewsroom back on Dec 11th, but hey I'm still drinking this Earl Grey ESB every time I get the chance so I'm still talking about it. Check out a cool video with my heroes Josiah Moody (Moody Brews) and Sammi Stephenson (Apple Blossom) brewing up some deliciousness:

"Fayetteville's Apple Blossom is partnering with Josiah Moody, founder and master brewer of Little Rock's Moody Brews, to create an Earl Grey ESB. "This is a quirky session beer," Moody said. "It has a big citrus and black tea aroma, but also has a very approachable, nutty malt. With each sip, these attributes stand out differently and keep the palate guessing." 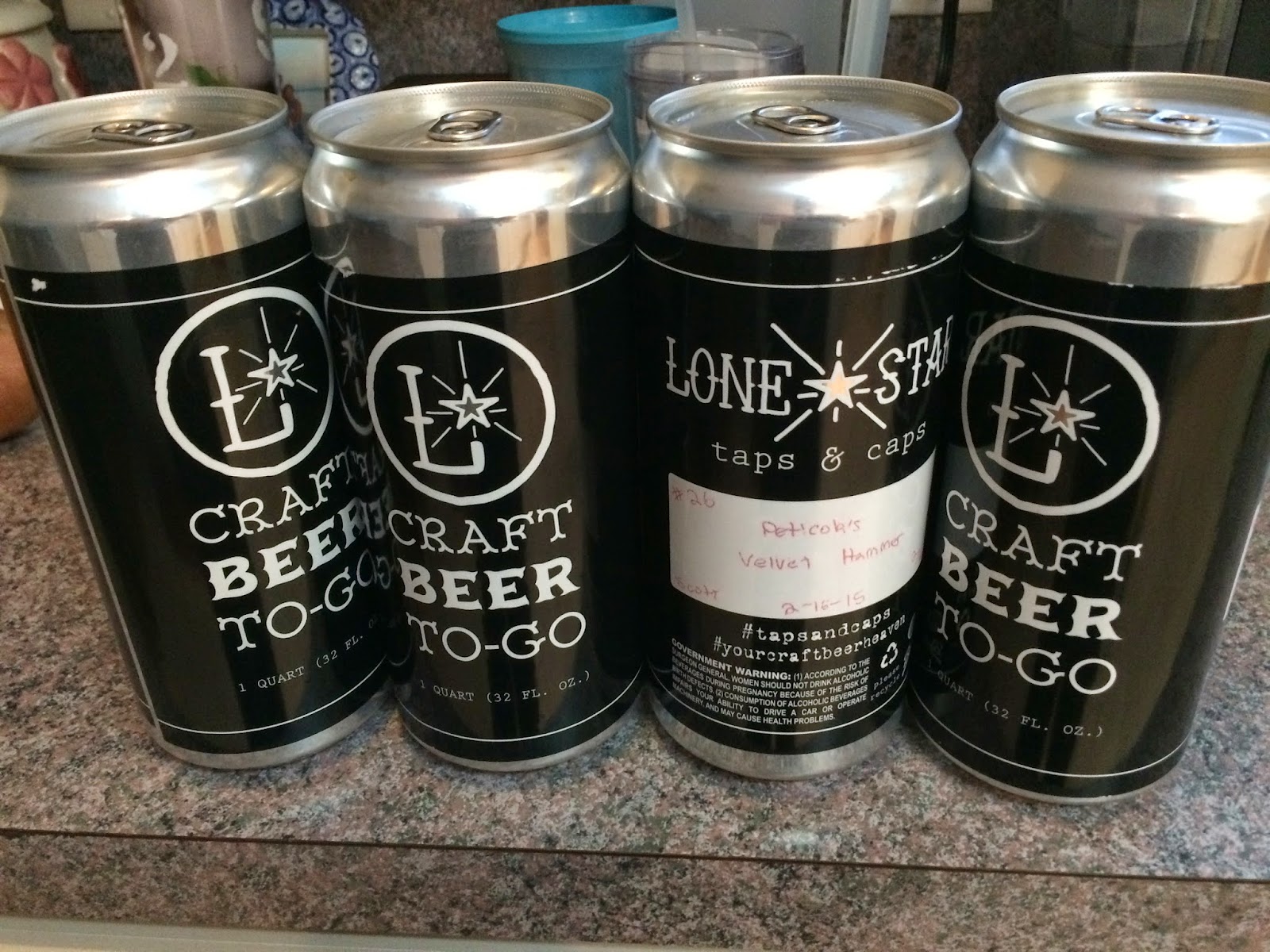 So I picked up a 4 more crowler cans in Texas this weekend at Lonestar Taps and Caps and I have to say that this is THE FUTURE of growler fills. Period. They're just so convenient and practical. Basically, you pay $1 extra for the can, they fill it and cap it and presto... your beer is ready to hit the cooler or your fridge and stay fresh for I'd guess at least a few weeks. That's versus several days for the glass growlers (for me anyways, I don't like to go longer than that). And when you're done, recycle the can. No glass containers all over the place, no cleaning, no problem.

LOVE THIS SO MUCH.

I scored 32 oz of Ballast Point Even Keel, Cobra Dawn of the Dank, Peticolas Velvet Hammer and Rabbit Hole Dark Snark all for $31. That's $27 for the brew, $4 for the cans. Ka-boom!

Here's more with a video from Dry Dock Brewing Co.:

"The Crowler™ is a one-use, recyclable 32-oz can that is filled and seamed right at the bar."

Celebrate your one true love.

Celebrate your one true love. #ForTheLoveOfBeer
Posted by Woo Pig Brewey! at 8:03 AM No comments: 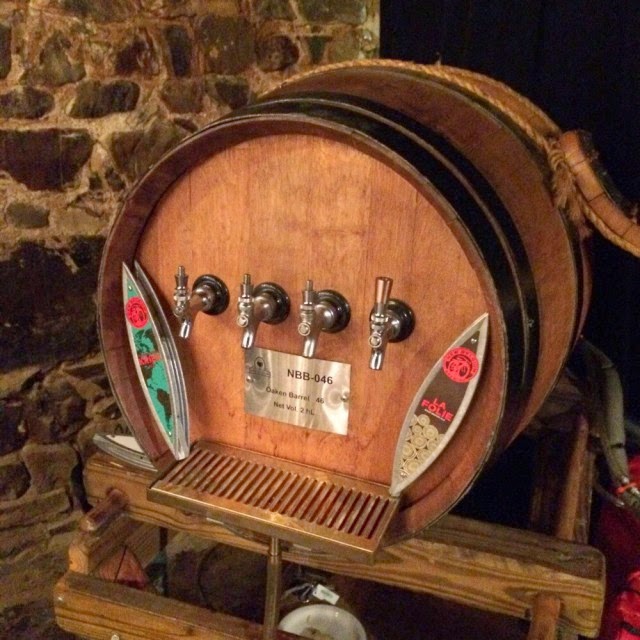 Wow, it's been awhile since I visited my countdown of favorite beer songs. Hey, I've been busy! I'll get back to it. Let's see where we are so far...

OK, so number six is more sentimental than it is a party time song, but I really dig it. I have friends that I remember the best times as us sitting down have a few cold ones with some deep conversation, or at least it was deep to us at the time. In fact, my step dad passed away a few years ago actually and I do remember many a conversation with him over a few of his favorites... usually Busch Light. They tasted great in hindsight.

"So I'm gonna sit right here
On the edge of this pier
Watch the sunset disappear
And drink a beer."

#AskDogfish: Sours, The Infamous Bud Ad and Starting Up

No doubt, one of my favorite breweries is Dogfish Head, out of Milton, Delaware. We still can't get it here in Arkansas but it's pretty easy to find in surrounding states and I always bring some home from road trips and drink it often. They started a new hashtag on Twitter, #AskDogfish, where people ask questions and founder/beer god Sam Calagione answers them. Check out the first episode below.

"Hop up into the Steampunk Treehouse for some truth-talking with Dogfish Founder and President Sam Calagione."

I'm really looking forward to the next beer in Summit's Unchained series, this one a double IPA called Hop Silo. In addition to making great beer, these guys also make great videos. Here's the latest.

"Brewer Eric Harper tells us about the epic brew for his Unchained 18: Hop Silo Double IPA! Look for this hop-beast of a beer in 16oz cans and on draft in early March where available!"

While I'm nowhere near on the level with beer gods like Brew Travelers, I do visit a lot of breweries during the year. Punxatawney Phil has just made his appearance and I've already been to 9 this year in 3 different states, with more on the upcoming schedule. My recent trip to Memphis this past weekend added 3 more to my list, and I've got Fort Worth in the sights for a few more.

I love all my local breweries and pretty much a week doesn't go by that I'm not in at least one of them, but it's really become something fun to do when traveling as well. Lucky for me, my wife is also a craft beer lover so we really enjoy the road trips. At some point I need to go back and count how many I visited last year, but I'm going to do a better job of documenting this year's breweries. Hopefully I'll be adding Martin House (Fort Worth, TX), Rahr & Sons (Fort Worth, TX) and Pecan Point Brewing (Texarkana, TX) next weekend.

Here's a few pics from the past weekend :