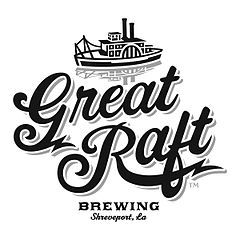 
August 15, 2016, SHREVEPORT, La. – Shreveport-based Great Raft Brewing has signed on with new wholesalers to expand its distribution beyond Louisiana for the first time, and will soon be available to craft beer fans across Arkansas and in East Texas. Great Raft is partnering with the coordinated statewide distribution network of Arkansas Craft Distributors and O'Connor Distributing for the entire state of Arkansas and R&K Distributing for the East Texas market.

Established in 2012, Great Raft Brewing is one of the fastest growing craft breweries in the South. In order to meet demand, both within Louisiana and the region, the brewery is making investments in both quality and capacity. An additional 140 barrels of capacity will be added to Great Raft’s cellar along with a state-of-the-art GEA centrifuge. “As our beer travels farther from home, it’s critical that we take the steps necessary to protect and deliver the beer in the best means possible. The addition of a centrifuge brings our overall quality program up-to-speed with the biggest and best in the industry,” said founder and President Andrew Nations. “From day one, we’ve put our money where our mouth is with quality. Simply put, this significant and progressive investment makes our beer taste better. That’s really all there is to it,” he added.

In addition to the increased fermentation capacity for their traditional program, Great Raft is also doubling down on capacity for its Belgian program. Since launching this part of the operation in early spring 2016, Great Raft has already won a medal for one of its Belgian-style beers, Farmhouse Slang – a mixed fermentation saison – for which it won Bronze at the 2016 U.S Beer Open Championships. “The addition meets an immediate need to produce a greater volume and variety of Belgian inspired beers. The response has been outstanding as more and more people demand beers of the sour and funky variety”.

Great Raft Brewing is excited about this new market expansion and eager to bring their beer across state lines for the first time into Arkansas and Texas. “Growing to neighboring states feels very organic. We’ve always said we would take care of Louisiana first, and that isn’t changing. It’s time to start serving new markets who routinely express interest in our beer,” said Nations. “Despite the temptation to share our beer with as many people as possible, we will continue to take a relatively slow, methodical approach to growth.”

More information about Great Raft Brewing can be found at www.greatraftbrewing.com.

I'm lucky enough to live within walking distance of a BJ's Brewhouse in North Little Rock and I enjoy checking out their house beers regularly. I especially love it when a new one pops up, as it did recently with this collaboration Rye IPA they did with Green Flash Brewing. I stopped in this weekend to check it out for myself and found it to be quite tasty. Go check one out for yourself. Here's a bit of promo they did for it.
"In episode 4 of Pint Class, we learn about the flash of inspiration that led to the collaboration of BJ's Brewhouse and Green Flash Brewing Co. on Hop Pact IPA™!"
Posted by Woo Pig Brewey! at 7:44 PM No comments: