Kansas City's outstanding beer bar Bier Station posted this funny video and I deemed it definitely worth a share. Cheers!

Bier Station: In case you missed it, or what to re-live all the snark and laughs, we present, "Brewers Read Mean Reviews: The Video". Big thanks to all our good-sport brewers, and Chris Luckey for his fantastic shooting and editing skills. Warning: If there are kids nearby... "Earmuffs!".


In case you missed it, or what to re-live all the snark and laughs, we present, "Brewers Read Mean Reviews: The Video". Big thanks to all our good-sport brewers, and Chris Luckey for his fantastic shooting and editing skills. Warning: If there are kids nearby... "Earmuffs!".Boulevard Brewing Company, Torn Label Brewing Company Martin City Brewing Company The Free State Brewing Co. Cinder Block Brewery Kansas City Bier Company.
Posted by Bier Station on Tuesday, June 30, 2015 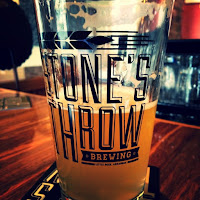 Little Rock, AR, June 25, 2015 – Local neighborhood nano-brewery Stone’s Throw announced plans to celebrate their second anniversary today. Their first brew day will be commemorated on Saturday, July 4 with the release of rare beers made over the past year. On Saturday, August 1 the opening of the brewery taproom will be celebrated with the second annual Block on Rock Birthday Bash.
“We brewed our first batch of beer on July 4, 2013 because it was the first day that Shawn, Theron, Ian & I all had off from our day jobs together after we got our brewing permit. I can’t believe it’s already been 2 years!”
Brad McLaurin, co-owner
The July 4 “Brewversary” will see the release of Anniversary Stout, which replicates the first beer brewed at Stone’s Throw location in downtown Little Rock. Shamus Stout was the intended beer that day, but the more efficient equipment resulted in a much stronger beer than the version originally brewed at home. With a few adjustments the Shamus recipe was tamed and became one of the breweries best sellers, but the version produced from that first batch has maintained a following since. Now the brewery releases the stronger Anniversary Stout for Independence Day every year.
“There is a learning curve when you go from 10 gallon to 100 gallon batches, and the new equipment worked a whole lot better than we expected. Even if that first beer didn’t come out as planned, it was still really good so we wanted to try and make it again sometime.”
Shawn Tobin, Co-Owner
While only the release of Anniversary Stout commemorated the Brewversary in 2014, for the second year Stone’s Throw has added a special attraction for customers. Beers produced throughout the past year have been carefully selected to age, known as cellaring. An extremely limited supply of Big Dam Horn O’Plenty Imperial Oktoberfest, Lil Peaty’s Wee Heavy Scotch Ale, and Chipotle Porter aged in a Rock Town Distillery Bourbon barrel will be available starting at noon on July 4 until supplies run out.
“Bigger beers like Big Dam Horn O’Plenty just get better and better with age, and this keg has been cellaring since last fall. I’m really looking forward to giving it a try.”
Theron Cash, Co-Owner
The Block on Rock Birthday Bash will be held August 1 from 3:00-10:00pm to commemorate the opening of the onsite taproom to the public on August 1, 2013. Approximately 1200 people—four times as many as expected—attended the first Block on Rock in 2014. This year additional street space is being added to accommodate the crowds, even more food trucks will set up, and other breweries & distilleries from around Arkansas will be featured. Admission and Stone’s Throw sales will benefit Preserve Arkansas, while proceeds from guest breweries will help support the Arkansas Brewers Guild. The event will continue to be held annually on the first Saturday in August.
“The response last year completely took us by surprise, so we’ve been working on improving things for the second Block on Rock ever since. Along with all the great beers, food trucks & vendors, we’re also going to have live music from 2 local favorites: The Big Dam Horns, and Cindy Woolf & Mark Bilyeu. We can’t wait!”
Ian Beard, Co-Owner
Stone’s Throw Brewing is the product of four guys—Theron Cash, Brad McLaurin, Shawn Tobin and Ian Beard—Who met in the local home brew club, the Central Arkansas Fermenters. After turning a dusty building in Little Rock’s MacArthur Park Historic District into a production facility, they began brewing operations on July 4, 2013 and opened a tap room on August 1, 2013. Stone’s Throw Brewing specializes in small-batch, artisanal beers that are both creative and drinkable.
The Stone’s Throw Brewing tap room is open to the public Wednesday-Thursday, 4:00-9:00 pm, Friday 4:00-10:00pm, Saturday 12:00-10:00 pm, and Sunday 11:00 am-8:00 pm. The tap room features different food trucks each day and offers all night happy hour on Wednesdays, #ArkiePubTrivia at 6:30pm on Thursdays, new beer releases every first Friday of the month, free brewery tours at 1:00pm and beer infusions at 4:00pm on Saturdays, and beer to go on Sundays.
Current beer selection, food truck schedules, and upcoming events can be found at www.stonesthrowbeer.com, on Facebook at StonesThrowBrewing, Twitter @stonesthrowbrew and Instagram @stonesthrowbrewing.
Posted by Woo Pig Brewey! at 7:41 AM No comments:

Opening 5 Beers At Once? No Problem