Here's some interesting back story on the distribution deal as well.

I certainly drank plenty from Summit Brewing this year, as I do every year now that I think about it. Here's a nice holiday greeting from the Saint Paul, Minnesota brewery responsible for one of my favorite beers of the year, Unchained Make It So ESB, a killer herbal Earl Grey tea concoction. Cheers!
"Summit staff share some of their favorite holiday traditions, foods and gifts.
Happy Holidays and Happy New Year from Summit!
Holiday shout-out to Cafe Accordian Orchestra for letting us use their great music for the video!"
Posted by Woo Pig Brewey! at 11:22 AM No comments:

Victory Announces the Launch of its Blackboard Series

Downingtown, PA,December 22, 2015- Victory Brewing Company (Victory) announces the launch of its Blackboard Series, four adventurous and deliciously distinctive beers brewed with fresh ingredients that are a creative craft riff on restaurant blackboard specials. The annual series includes a new creation every three months alternating between bottle and draft only releases. Much like restaurant blackboard specials are used to entice loyal patrons to veer off menu and try something interesting and new with market-fresh produce so does the Victory Blackboard Series. 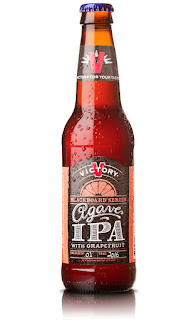 The first special in the series, Agave IPA with Grapefruit, will be released on January 1, 2016 and is brewed with four variations of American hops that juxtapose strong and bitter aromas against agave and grapefruit additions to create a light, citric bite. The ale is fresh, crisp and bracing, reminiscent of a ripe, ruby red grapefruit. The sweet agave syrup provides a perfect foil to the tartness of the grapefruit resulting in a juicy winter fruit beer. Agave IPA with Grapefruit is available from January through March and can be purchased throughout Victory’s 37-state distribution footprint for a suggested retail price of $9.99 for a 4-pack of 12 oz. bottles. Pricing will vary slightly based upon location. Use Victory’s Beerfinder to discover a nearby location, or download the free Victory Mobile app for Android or iPhone.

As part of the series launch, all three Victory Brewpubs - Downingtown, Kennett Square and Parkesburg are fully ‘embracing the blackboard’ with culinary creations perfectly suited to, or using the ingredients found in, Agave IPA with Grapefruit to celebrate the launch of this series. While Victory will always serve their popular, hop-forward brands and equally delicious fare, it anticipates the alternating bottle and draft “beers du jour” will please and excite the palates of craft beer and brewpub fans alike.

The second beer of the series is certain to excite the funky and wild ambitions side of many craft beer fans. The Dry-Hopped Brett Pils will be available on draft from April to June 2016. The third offering, a Berliner Weisse with Elderflower, will be sold in 12 oz. bottles. The final introduction of the series is an Oatmeal Porter with Hazelnut in a draft format.

“We developed the idea for this series while witnessing the popularity of the daily menu additions in our brewpubs. Using super fresh, seasonal ingredients as the driving force of our Blackboard Series we welcome January and it's bounty of enticing grapefruits,” said Victory’s President and Brewmaster, Bill Covaleski. “The goal of the Blackboard Series is to be flexible, adaptable and diverse while maintaining our high standard for quality. Much like our talented chefs make menu changes, we followed suit to bring ‘specials’ to our fans from the blackboard to the bottle or tap.”
Posted by Woo Pig Brewey! at 11:34 AM No comments:

Now this is how Christmas music should be done!

The Best Belgian Christmas beers from The Craft Beer Channel

Wanted to share this fun video from the guys at The Craft Beer Channel of "The Best Belgian Christmas Beers" for a couple of reasons. First, it's Christmas themed. Duh. And second, it has nothing to do with Star Wars! Enjoy.

"Jonny and the Brad try a selection of Belgium's best Christmas beers, all matched with festive treats from a supermarket sweep round Aldi."

(Little Rock, Arkansas, USA – December 8, 2015) – Lost Forty Brewing establishes partnership with the Arkansas Natural Heritage Commission to launch the Lost Forty Project Foundation which seeks to support and enhance conservation efforts across the state by raising funds and building awareness. The Lost Forty Project Foundation will work with the Arkansas Natural Heritage Commission and other conservation partners to ensure that resources go to high priority, viable conservation projects that will protect biological diversity for generations to come. The appointed members of the board include John Beachboard, Theo Witsell, and Chris Colclasure.

###
About the Arkansas Natural Heritage Commission
The Arkansas Natural Heritage Commission is a leader in science-based conservation in Arkansas. Their work over the past 40 years has identified and protected some of the most beautiful and ecologically significant natural places in the state including the 71 public nature preserves that make up the state’s System of Natural Areas. ANHC also works with a variety of public and private conservation partners to protect other unique places. like the ‘Lost 40’ acreage in Calhoun County for which Lost Forty Brewing is named, so that they may remain intact and be enjoyed by future generations of the Natural State.

Forget Sonny & Cher, Captain & Tennille or Hall & Oates, this is the greatest team-up in history. Two of my favorite all-time breweries, Stone and Sierra Nevada, have collaborated on a beer and what else would it be but an IPA? It certainly sounds delicious. Happy hunting!


"A California collaboration that blends a dry-hopped IPA with a barrel-aged IPA.

For many, California is considered an epicenter for brewing innovation, particularly where hoppy IPAs are concerned. We teamed up with our longtime craft compatriots and mutual hop admirers at Sierra Nevada Brewing Co. to create a truly one-of-a-kind IPA.

This special-edition beer conveys the true character of collaboration with touches of inventiveness and creativity. Two batches of an IPA were brewed and expertly blended to craft this multilayered beer. We took the first batch of IPA and aged half of it in gin-infused bourbon barrels and the other half in rye whiskey barrels. The second batch was brewed a month later and generously dry-hopped to impart rich aromas to accompany the citrusy, piney, woody, herbaceous flavors achieved from this truly one-of-a-kind collaboration."
More info: http://www.stonebrewing.com/blog/beer/2015/stone-sierra-nevada-nxs-ipa
Posted by Woo Pig Brewey! at 8:11 AM No comments: