From Victory Brewing Company: "Home Grown New American Lager is the type of beer we've been thinkin' about for years.

www.victorybeer.com/beers/victory-home-grown
Posted by Woo Pig Brewey! at 5:40 PM No comments:

Little Rock, AR, July 17, 2017– MacArthur Park neighborhood nano-brewery Stone’s Throw Brewing announced plans for their fourth annual Block on Rock Birthday Bash today. The street festival is a celebration of the brewery’s opening in 2013 and involves local food trucks, breweries, a distillery, bands, and community groups. Block on Rock is on Saturday, July 29 from 4:00-10:00pm on the two blocks of Rock St. north of the brewery’s location at 402 E 9th St in Little Rock.

"We love the way this little street festival has grown over the past four years! It’s by far the biggest event we do at the brewery, and we are able to improve and grow the block party each time. The support we get from the community on this is extremely humbling.”
Ian Beard, Managing Partner Stone’s Throw Brewing

Admission to the block party is $5. Discounted armbands are available at the Stone’s Throw taproom for $3 from July 25-28. A portion of all gate revenue, alcohol, and food sales are donated to Preserve Arkansas, the only statewide non-profit organization focused on preserving Arkansas’s architectural and cultural resources. The previous three Block on Rock events have raised over $7800 for the group.

1200 people attended the first Block on Rock in 2014 taking planners completely by surprise. Since then organizers have added a second block to accommodate more people, food trucks, and vendors. A stage was constructed for the musical acts, more volunteers helped with entry at the gates, other local breweries were invited, and more necessities like extra restrooms were included. The improvements lead to significantly shorter waits for food, drinks, and toilets despite attendance increasing to over 2000 in the following years.

“The first year was crazy. We sold more food in a couple of hours at Block on Rock than we did the whole time we were at Riverfest. This year I think we’re all planning on serving big numbers and we’ll be ready for them. After the Main Street Food Truck Festival this is one of the biggest gatherings of trucks you’ll find in Little Rock.”
Justin Patterson, Owner The Southern Gourmasian

Both the 700 and 800 blocks of Rock St., located adjacent to the brewery, will be closed off for the event. Entrance gates will be located along Rock Street at the intersections of 7th, 8th and 9th Streets.  The mainstage is located just a few yards northwest of the brewery on Rock St. The Big Dam Horns return again this year and will perform a double set starting at 6pm; trees and buildings provide ample shade in the afternoon, and festival goers are encouraged to bring chairs. Beer is available at the brewery itself and at an outdoor Stone’s Throw bar on the 700 block of Rock St.; food trucks and other beverage options will be available in the same area.

New this year is a partnership with the Arkansas Arts Center involving the Pike-Terry-Fletcher House. The grounds of the mansion will be part of the festival area creating a giant biergarten for people to enjoy. Rackensack Folklore Society of Pulaski County will play on the front porch with a rotating line-up of performers from 4:00-10:00pm. The Arkansas Arts Center will also be presenting demonstrations for festival goers to enjoy.

“The Arkansas Arts Center is excited to be part of Block on Rock and to showcase the talent of some great local artists. Robert Bean is doing a drawing demo, Beth Lambert and Julia Baugh are working on a pinch pot project, Randie Young has a chalk art project for adults and youth, and renowned hula hooper Katie Sunshine performs!”

25% of alcohol sales and 10% of other sales will benefit Preserve Arkansas, the only statewide non-profit organization focused on preserving Arkansas’s architectural and cultural resources.

The following is the list at press time of vendors registered to participate in the Block on Rock 4th Birthday Bash on July 29. Up to date event details are available at https://www.facebook.com/events/954580774650649/

The Big Dam Horns (pictured here from the 2015 Block on Rock) return this year and will play a double set beginning at 6:00pm on July 29.

One of my goals for 2017 was to visit 50 different breweries. Checking on my status so far it seems I've made it to 36, perhaps using the term "brewery" a little loosely on a couple. It's almost hard to say anymore with all the satellite taprooms and such, but if a place is brewing beer I call it a brewery. Anyway, it's not exactly a scientific study so whatevs, just roll with it.

But my 36 so far are from across the country, with stops in Missouri, Tennessee, California and Louisiana as well as my home base in Arkansas. I do have trips to Florida and Texas in the next few months so 50 may not be out of the question.

Here's my list I've compiled with the help of Untappd, included with the last time I visited them. Some of these I've obviously been to a lot more than once this year.

Check out the latest edition of Tap Time radio on 103.7 The Buzz from Monday July 24th, 2017. Our guests were Theron from Stone's Throw Brewing in Little Rock talking about their upcoming Block on Rock anniversary party coming up plus visitors from the new brewery to the state, Austin's Independence Brewing, in the studio.
Posted by Woo Pig Brewey! at 7:38 AM No comments: 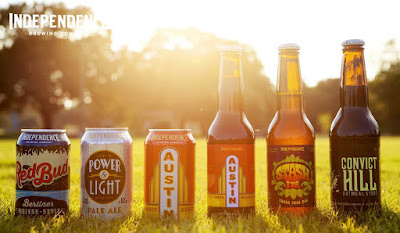 Independence Brewing Co. expands distribution throughout Arkansas
Austin-based craft brewery finds a ‘natural’ fit with first statewide territory outside of Texas
AUSTIN, Texas (July 26, 2017) –  Independence Brewing Co., one of Texas’ original craft breweries, today announced the company will begin distributing its lineup of award-winning beers throughout the state of Arkansas. The new territory signals the brand’s first expansion of distribution outside its home state of Texas.
Independence’ Brewing Co.’s core lineup of craft brews, which include Austin Amber, Liberty Lunch IPA, Redbud Berliner Weisse, Power & Light Pale Ale, and the brand’s top-selling beer, Stash IPA, are available now in both on-premise bars and restaurants as well as off-premise retail stores. Little Rock-based Central Distributing have signed on as Independence’s wholesale partner throughout the Natural State.
“We had canoed and camp along the Buffalo River years ago, so when we began looking into new markets for Independence, Arkansas really stood out against the other states we were considering,” said Amy Cartwright, co-founder and president of Independence Brewing Co.
“The people of Arkansas really seem to hold similar values as we do at Independence; a love for the outdoors, supporting local music and the arts, and giving back to the community. We’re truly excited to hit the ground running in our first new state and hopefully become a part of its amazing culture for a long time ahead,”  Cartwright said.
Independence Brewing Co. was founded in Austin, Texas in 2004 by the husband and wife team of Rob and Amy Cartwright with the goal of brewing craft beers for “independent thinkers and independent drinkers.” The brand ranks among the top independent brewers of craft beer in the state of Texas with nearly 16 thousand barrels produced in 2016.
To celebrate the brand’s milestone, Independence Brewing Co. will host several events throughout the week in Little Rock and Northwest Arkansas. Individual event details can be found on Independence Brewing Co.’s Facebook page.
Media Contact:
Christopher Marsh
Tomahawk PR
holler@tomahawkpr.com
About Independence Brewing Co.
Founded in 2004, Independence Brewing Co. is one of Texas’ original craft breweries. Based in Austin and brewed for independent thinkers and drinkers, Independence’s year-round offerings include: Austin Amber, Convict Hill Oatmeal Stout, Liberty Lunch IPA, Redbud Berliner Weisse, Stash IPA and Power & Light Pale Ale - 2016 World Beer Cup Gold Medal winner. Over 21 and want more info? Visit IndependenceBrewing.com #ThinkForYourself #DrinkForYourself
Posted by Woo Pig Brewey! at 2:42 PM No comments: