History of the Märzen -- Oktoberfest Beer

Great video from "Beer By The Numbers"...
"Märzens are one of my favorite beer styles, especially as the heat of the summer begins to cool off. But besides being the most popular beers at Oktoberfest they have a really rich history being a part of the lager revolution. So join Ryan on a trip through beer history to discover the origins and evolution of the Märzen."
Beer by The Numbers Facebook -- https://www.facebook.com/groups/146200836174391
Posted by Woo Pig Brewey! at 4:11 PM No comments:

A limited-edition collaboration between New Belgium and Knob Creek, Oakspire is a unique bourbon barrel ale aged with bourbon-steeped oak spirals and char from inside the barrel. Smooth notes of toffee, vanilla and caramel wrap up with a pleasantly warm finish.
Oakspire: Where innovation meets tradition.

More: https://www.newbelgium.com/beer/oakspire
Posted by Woo Pig Brewey! at 10:00 AM No comments: 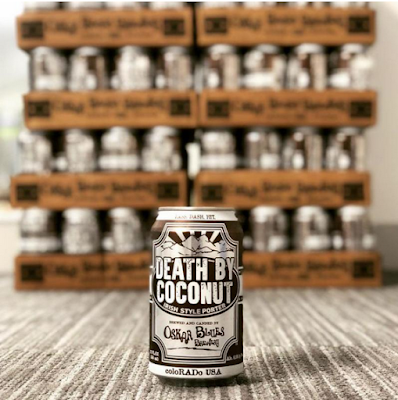 LONGMONT, CO, SEPTEMBER 19, 2018 - Oskar Blues Brewery announces a cult classic comeback - Death by Coconut Irish Porter returns for winter 2018 with kickoff events in taprooms on October 5. The seasonal brew marries flavors of bittersweet cacao and creamy coconut; asserts that beer is the perfect dessert; and invites believers to join the Death by Coconut Irish Porter Cult this season. The 6.5% ABV porter will be nationally distributed in 4-packs of 12oz cans starting in early October.

Chocolate and coconut are perfectly intertwined in a recipe that pleases the beer gods. “No false advertising here – it’s as straightforward a chocolate-and-coconut beer as it gets,” said Juice Drapeau, Head Brewer at the Oskar Blues pilot brewery in Lyons. “The chocolate-y malt flavors and coconut aroma and flavor are nicely balanced, and it’s not as viscous as a stout, which makes it more palatable.”

Death by Coconut was originally brewed as a small batch collaboration with Shamrock Brewing in 2014 and went on to earn a silver medal at GABF in the chocolate beer category. At that point, increased demand challenged brewers to find innovative ways to accentuate the rich chocolate flavor while increasing consistency and stability for distribution of the cult favorite outside of the taproom.

Boulder-based Cholaca provided the answer to the chocolate question. The product is made from three ingredients - water, cacao and coconut sugar - and allows brewers to give beer a rich, smooth chocolate flavor by adding liquid chocolate (cacao emulsified in water) rather than using cacao nibs or powders. Plus, the cacao is sourced directly from farmers and co-ops in Ecuador that utilize regenerative farming practices. “Now Cholaca is in over 700 breweries, in 50 states including Canada, in 15 countries, including Australia. That volume gives us the ability to import quality cacao. It helps us get the great stuff,” said Cholaca founder Ira Leibtag. “Without the great stuff, we end up with GMO and preservative-infiltrated product… and ruined rainforests.”

Cholaca’s bittersweet chocolate flavor comes together with raw, desiccated coconut and a malt bill based around Simpson’s Extra Dark Crystal. The result is a rich, dessert-y flavor with a light, approachable mouthfeel.

Folks interested in ritual beer-drinking, chocolate worship and coconut offerings are invited to join the Death by Coconut 2018 cult. The initiation happens on October 5. Check out party details here:

Following taproom releases, Death by Coconut will be distributed nationally in 4-packs of 12oz cans. Use the beerfinder to find it on shelves near you.

How to Pair Sushi with Beer | That's Odd, Let's Drink It

Sushi and beer pairings get an upgrade in the season finale of That's Odd, Let's Drink. Instead of drinking cans of industrial lager with takeout California rolls, brewmaster Sam Calagione attempts to match Japanese and American brews with some of the greatest hits from the omakase menu at Shuko, one of NYC's most acclaimed sushi bars. Joining the micro-pairing adventure is musician Julianna Barwick, who brewed a sushi-inspired, wasabi-infused beer called Rosabi with Sam a few years back.
Subscribe to First We Feast on YouTube: http://goo.gl/UxFzhK
Check out more of First We Feast here:
http://firstwefeast.com/
https://twitter.com/firstwefeast
https://www.facebook.com/FirstWeFeast
http://instagram.com/firstwefeast
First We Feast videos offer an iconoclastic view into the culinary world, taking you behind-the-scenes with some of the country's best chefs and finding the unexpected places where food and pop culture intersect.
Posted by Woo Pig Brewey! at 10:00 AM No comments:

Personally I love Founders and I also love their ArtPrize Series. Previous ArtPrize Series beers include some of my favorites like Green Zebra (!!!) and Pale Joe. Here's more on their latest.
Founders Brewing Company: "For our 2018 ArtPrize beer Trigo, we reached out to our immensely talented Founders Family to create a piece of original work for the label. This year, that honor went to culinary team member Cody Levon, an incredible kitsch painter whose work emulates the beautiful methods of the old masters. His painting of a strong Spanish woman includes subtle references to Spain such as the Red Carnation. We worked with our pals at Mahou San Miguel to bring the recipe for Trigo (Spanish for ‘wheat’) to life. The result is a clean and crisp wheat lager with big, American-hopped aromatics."

Learn more about Trigo here: https://foundersbrewing.com/latest-news/2018/newbeerreleasetrigo/
Posted by Woo Pig Brewey! at 6:39 AM No comments:

Check out last night's edition of Tap Time on 103.7 The Buzz with our guest A.B. Naylor discussing this weekend's Little Rocktoberfest and lots more:
Posted by Woo Pig Brewey! at 7:10 AM No comments:

Dogfish Head Craft Brewery: We’ve been producing and perfecting the sour ale for over two decades now, so we got to thinking … wouldn’t it be nice if you could get your hands on even more wild ales from Dogfish Head? Well friends, your wildest dreams are about to come true thanks to our new, funky wild beer program, ‘Wooden … it be nice!’
Learn more at: dogfish.com/blog
Posted by Woo Pig Brewey! at 10:39 AM No comments:

I'm a big fan of Michigan's Founder's Brewing Co. and would probably have them in my top 3 favorite breweries overall. I like them because they make great beers and also they take chances on styles. Making a premium lager was a bit of a risk in my opinion, not a lot of craft breweries were taking on that market share at the time, but the resulting beer, Solid Gold, is just crazy easy to drink. In the age of giant hop bombs and barrel-aged everything, "crushable" is becoming a lost art in my opinion.

Founder Brewing Company: "Why brew a premium lager and launch it year-round? Because taking chances is in our DNA.

Sean Evans is the perfect guinea pig for one of Dogfish Head brewmaster Sam Calagione's craziest recipes to date: In Your Mace, a pepper spray-infused stout custom-made for someone who has eaten the spiciest wings on the planet. Before unleashing this diabolical creation on Sean, Sam warms him up with a crash course in how to pair spicy foods with beer. Then, the duo decides to kick things up even further by running the Mace-spiked beer through a special contraption stuff with Carolina Reapers, Chocolate Bhutlahs, and a boatload of other peppers from chile guru Smokin' Ed Currie.

First We Feast videos offer an iconoclastic view into the culinary world, taking you behind-the-scenes with some of the country's best chefs and finding the unexpected places where food and pop culture intersect.
Posted by Woo Pig Brewey! at 10:06 AM No comments: