I'm sure this will be met negatively by the Bud haters, of which there are many, but it doesn't concern me. I don't mix my politics and beer. If I did of course I might see how timely this is for the #OrangeHitler supporters, of which there are many, and again it doesn't concern me. Drink or don't drink whatever you like.
But this is damn cool. Cheers Budweiser.
Budweiser: "This is the story of our founder’s ambitious journey to America in pursuit of his dream: to brew the King of Beers."
Posted by Woo Pig Brewey! at 7:43 PM 1 comment:

Plenty to do in February, as always, for
Stone's Throw Brewing lovers! 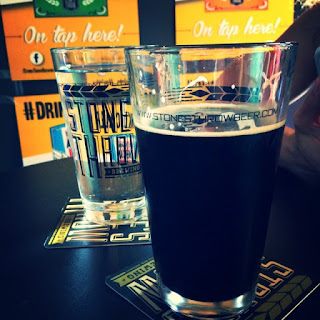 Thursday February 23, 6:00pm: Science After Dark at the Museum of Discovery

Founders Brewing Co.: Crafting legendary barrel-aged beers is an exercise in patience. We start by brewing complex, world-class beer worthy of time in a barrel. Then, our experience and years spent mastering our craft means we know exactly when it’s been aged to perfection. After one sip, you’ll know – it was worth the wait.

See more about the Barrel-Aged Series: https://foundersbrewing.com/barrel-aged-series/
Posted by Woo Pig Brewey! at 11:48 AM No comments:

Recorded Jan 25th, 2017: Randy and I chat with Josiah Moody of Moody Brews about his upcoming move from Vino's to Bike Rack Brewing and also Brandon Mize about his move from Lost Forty Brewing to Vino's to replace Josiah! Lots of changes in the Arkansas beer scene to discuss while we drink a delicious Moody Brews 2017 Katchiri's Bier. Check it out!
Posted by Woo Pig Brewey! at 7:39 AM No comments: 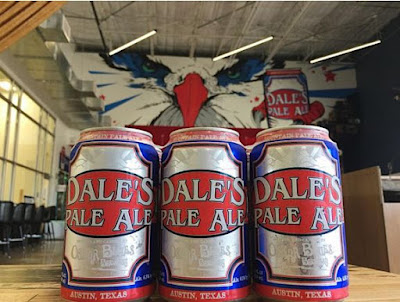 Longmont, CO, Brevard, NC & Austin, TX - Oskar Blues Brewery, the innovators behind the craft beer-in-a-can apocalypse, finished 2016 strong eclipsing 200,000 barrels shipped with several significant milestones achieved throughout the year including the addition of a brewery in Austin, several new SKUs, expansion of its barrel-aging program and the completion of its U.S. footprint. Flagship brew Dale's Pale Ale became the bestselling craft can 6-pack in total U.S. Food.
In August of 2016, Oskar Blues' brewery and live music venue opened its doors in Austin, TX while a 21,000 square foot expansion took place in its Brevard, NC brewery raising the potential capacity amongst all three breweries to 500,000 bbls and adding 43 jobs. The brand also completed its 50 state U.S. footprint with distribution in Montana and further expanded internationally with the addition of Australia, the Netherlands, and Belgium, totaling nine international markets.
Oskar Blues continued to push innovation through new beer offerings and packaging.  The Can gROWLER (CROWLER®) from Ball Corporation and Oskar Blues grew to over 1,000 installations to date.  Many of the last year's installations were due to new locations choosing aluminum over glass for their growler choice and many established locations discontinued offering glass growlers altogether.  CROWLER® has quickly shown how far cans have come and how beneficial the evolution of CROWLER® cans are to the growler customer.
The brewery launched four new SKUs, including year-round offerings BEERITO Amber Mexican Lager and Priscilla White Wit Wheat, while launching limited release cans of Passion Fruit Pinner IPA and Hotbox Coffee Porter. The expansion of its barrel-aging program resulted in national distribution of Barrel-aged Ten FIDY Imperial Stout in 19.2 ounce, single-serve cans and limited taproom-only releases of rum barrel-aged Death by Coconut, rum barrel-aged Ten FIDY and Java Ten FIDY. The team at Oskar Blues didn't stop there, recently launching Pinner Throwback IPA in new packaging - resulting in the first American craft beer 16-pack**.
Ancillary brands also saw growth, including four new flavors of B. Stiff & Sons Old Fashioned Soda Pop and the launch of new Oskar Blues Fooderies concepts in its home market of ColoRADo, which includes a CHUBurger/Hotbox Roasters Café brick and mortar location in the RiNo district of Denver.

Oskar Blues Holding Company, a strong group of craft brewers, including Wasatch Brewery, Squatters Brewery and Perrin Brewing furthered its mission to maintain symbiotic partnerships with like-minded craft brewers across the country with the addition of Tampa's Cigar City Brewing. While Dales Pale Ale is the bestselling craft can 6-pack in the U.S., Cigar City has the number two spot, with Jai Alai IPA.  Oskar Blues Holdings grew collectively to nearly 350,000 barrels and is the number two overall craft can vendor and number 15 overall in total U.S. Food.  That's a particularly good spot to be in, as craft cans have been up 55% over the last 52 weeks.

Oskar Blues continued to spread do-goodery with its nonprofit arm, CAN'd Aid Foundation. In 2016 alone, the organization raised $768,000, built & donated nearly 600 bikes to underprivileged children, put 100 instruments in budding musician's hands, recycled 155,000 lbs. of waste through its #CrushItCrusade and donated 330,000 cans of drinking water to areas in need including Flint, Michigan during its water crisis. Soul-founder of Oskar Blues Dale Katechis founded CAN'd Aid in 2013 following the Colorado flooding that devastated Oskar Blues Brewery's hometown in Lyons, Colorado. To date, over $2.6 million has been raised to support its efforts.
As for 2017, Oskar Blues has already set its sights on further growth, celebrating the 20th year of what started as a funky little brewpub in Lyons, CO in 1997. International markets to launch distribution in include Brazil and Japan. The brew team, not to be outdone by 2016, has announced the limited release of Hotbox Coffee IPA cans in March as well as a CANspiracy rare beer club at the North Carolina and Colorado Tasty Weasel Taprooms.  The Oskar Blues Fooderies restaurant group has already announced a Colorado Springs, CO location that will expand its footprint to over nine locations in 2017.  - stay tuned for more details at  www.oskarblues.com.
**Data Source & Set IRI Data, 2016 52 WEEKS TTL US FOOD.
Posted by Woo Pig Brewey! at 3:40 PM No comments:

On the latest Arkansas Beer Buzz podcast, Randy and I talk with Josh from Stone Brewing Company about Enjoy By 2-14-2017, new Megawheat Double IPA and the Ripper pale ale events in Argenta coming up on Thurs, Jan 19th. Plus talk of Rebel Kettle Brewing and more!
Posted by Woo Pig Brewey! at 7:24 AM No comments:

Here's the latest edition of Tap Time radio on 103.7 The Buzz. We chatted with Greg from Rock City Eats and Jess and Ryan from North Little Rock's Flyway Brewing. Check it out!
Posted by Woo Pig Brewey! at 11:32 AM No comments:

Rogue grows its own hops on a 42-acre hopyard on the banks of the Willamette River in Independence, Oregon. The 8 varieties include Alluvial, Freedom, Independent, Liberty, Newport, Rebel, Revolution, and Yaquina hops.
Posted by Woo Pig Brewey! at 7:30 AM No comments:

Let Quinn and Wally take you on a trip back in time with Bourbon County Stout and let us know what Goose Island Vintages they should taste through next!

Here's last night's podcast, when we visited with Jeff from Oklahoma City's Coop Ale Works and talked about their 2017 projects, drink some 2016 Territorial Reserve Imperial Stout and shared some local events for the next few weeks. Check it out!
Posted by Woo Pig Brewey! at 7:21 AM No comments:

Need some good news to kick off 2017? Check it out...
Victory Brewing Company: "Alright, alright, we heard you: Sour Monkey is back, and going year round! James Gentile, director of brewery operations, walks us through the brew day and multiple fermentations that make this Sour, Brett-Fermented Tripel a monkey all its own!"
Posted by Woo Pig Brewey! at 8:53 AM No comments:

How Arkansas Breweries Stack Up On Untappd

It's a new year so I think it's the perfect time to check on Untappd and see how the Arkansas breweries are doing, right? Let's jump right in!

Not a lot of changes at the top, but quite a bit of movement in the placements after the top 8.  Core did extend their lead in 1st place and both Lost Forty and Ozark are quickly closing the gap for 2nd and 3rd, but Diamond Bear has stayed locked in by a good, but shrinking margin. When I last checked (9/26/2016) Diamond Bear was +4,359 and now they're +1,730. Quite a difference.