Finally! We're back with more Beers To Cheer for March 2017! I know what you're thinking, and you're right... April is almost over already and you're just now doing March?!? Hey, drinking beer is a time consuming. Give me a break over here. Maybe you're just that much closer to April's beer, you think of that?

So you know the drill by now hopefully... three self-professed Arkansas beer nerds pick a couple of beers each (only 1 from Brian this month, he was a homebody) from the state and throw them some love. New beers, established beers... no criteria. Just good Arkansas beers. Let's get to it! 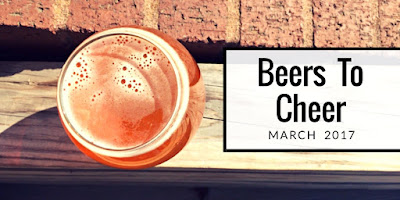 Moody Brews/Apple Blossom Brewing Company Earl Grey ESB - One of my favorite things about highlighting a few beers each month is the opportunity to revisit longtime favorites, and Earl Grey ESB is just that. This collaboration from Josiah Moody (through his Moody Brews brand) and Apple Blossom Brewing Company was first brewed in late 2014 and was the first collaboration between two Arkansas breweries in the recent era of craft beer. Like the return of Frosty the Snowman, baseball, or daylight savings, seeing Earl Grey ESB on tap brings a fond anticipation for a beer that feels as fresh as it tastes refreshing (the orange zest of the tea is a great finish to the malt-sweet base). One of the best conversation-starter beers in Arkansas, I’m glad I lucked into finding this on tap at Creekside Taproom (Siloam Springs) during March!

Columbus House Brewery Piles of Miles - One of the dominant themes in craft beer in 2016 was the ascension of the New England IPA as an in-demand style (and critical talking point). Customers and brewers in some of the most demanding U.S. beer markets have seen to it that the NE IPAs have a spot in their tanks, taps, and fridges. As a state, Arkansas is usually a little slow to take to trends and local beer is no different. There are, of course, rational reasons for this but it is always nice when there is an exception to this norm. Columbus House’s Piles of Miles (brewed in celebration of the 40th anniversary of the Joe Martin Stage Race) is one of a few NE IPA to be brewed in Arkansas in the last month and while it is not the haziest #juicebomb in the land, Piles of Miles gets into gear with a tropical, citrus flavor and condensed mouthfeel. Most importantly, it is an example of a small Arkansas brewery not waiting until a new style feels “safe” before brewing a batch. Cheers to Columbus House not only this brew but also giving it a bit of a spotlight!

Ozark Beer Co. Double IPA - There’s a lot of excitement swirling around Ozark’s move to its new location at 109 N. Arkansas in Rogers. I stopped by a few days after the doors opened on a soft opening basis and wasn’t disappointed. It's a space full of character. The two levels of drinking space are a phenomenal execution of what a taproom can be. My wife and I both thought it was somewhat similar to Puritan in Fayetteville (our favorite space to steal away to without the kids), but on the whole a much bigger imagination of the concept. Speaking of Puritan, that’s where I had Ozark’s Double IPA back in March. This year’s version was big (but not too big) and bold (but not too bold) with the citrusy punch you would expect from a west coast-inspired version of the style. The beer is over 8% ABV but drinks much closer to 5. The bitterness is held in check with nice round edges. In other words it’s smooth and highly drinkable. I can’t wait to visit Ozark’s new space once the brewhouse is up and running. And I really can’t wait to get my hands on this year’s version of BDCS, which arrives in May.

Superior Bathhouse The Killer Irish Red Ale - If you like redheads, or at least red beers, check out the latest Irish Red Ale batch from one of our great Hot Springs breweries. Easy to drink at 6% abv and 17 IBU, I found this very smooth with plenty of toasty malt character. Pours a pretty dark red and is easy to keep re-drinking. It's just a fairly "normal" style done well. I like that. 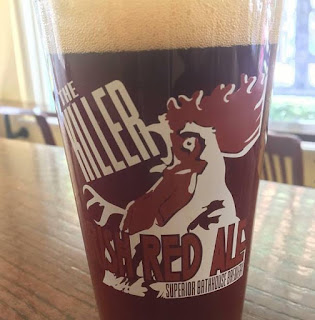 Rebel Kettle Pulp - The name of this Sour IPA aged on mangoes is pretty much just perfect. Sitting in the glass waiting on me to attack it, this beer looks so hazy it's almost like a pulpy orange juice. Flavor-wise it delivers with a juicy, fruity, tart glass of deliciousness. Oh it's bitter like I want my IPAs to be, but it all plays so well with the fruity tartness. I noticed reviews on Untappd ranged from "sour AF" to "IPA kick"... so it's a marriage of both worlds I guess. Get your pulp on. 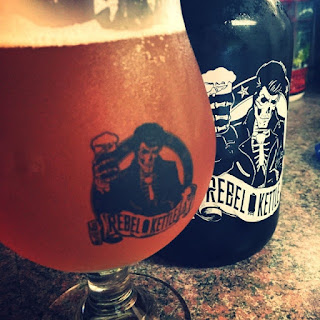 Check out our Arkansas Beer Buzz podcast from April 6th, 2017 with Great Raft Brewing founder Andrew Nations:
Posted by Woo Pig Brewey! at 7:24 AM No comments:

Here's Tap Time last night with Ben from the Arkansas Travelers talking about ballpark food and beer at Dickey-Stephens Park, with play opening today. Also Angela of central Arkansas' Food & Foam Fest on April 14th. Dig it...
Posted by Woo Pig Brewey! at 8:58 AM No comments:

Razorback Sports on the Big Screen (subject to availability)