When Michael (aka @Fayettebrew on the Twitterer) approached Brian Sorensen and I about a new feature he was wanting to give a go to show Arkansas beers some love, we were both instantly all about it. His idea? All of us pick two Arkansas beers every month that we feel were some of our favorites over that month, be they new releases or already "classic", and say a little bit on what we loved about them. Sounds pretty simple for three Arkansas beer geeks right? Well, maybe it would have been a few years ago, but right now I have to say with all the breweries and all the beers coming out it's pretty damn tough to narrow the list to a six-pack every month. But we'll try. At least we'll hopefully get to spotlight 72 beers this year right? 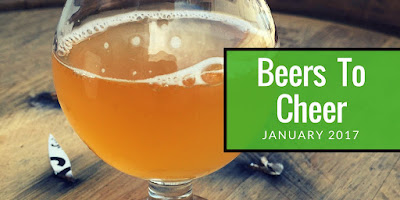 Airship IPA, Bentonville Brewing Company - This coffee IPA has returned after debuting last winter and balances the coffee and hop bitterness more confidently than it did before. With local coffee roasters dotting the map in northwest Arkansas with a similar frequency to breweries, it is no surprise that there are no less than six local coffee beer/ cider offerings available in the area right now (including another coffee IPA at Fossil Cove). Airship IPA, a collaboration between Airship Coffee and Bentonville Brewing, makes a place for itself by virtue of being a big IPA (7% abv) with fresh coffee snap to it. 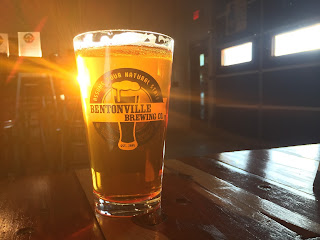 Coffee Brown, West Mountain Brewing Company - This easy going brown ale with coffee (once again featuring Airship Coffee) accentuates more of the roasty characteristics of the coffee-beer relationship, making it great for those evenings when the temperature drops with the sun. More than another coffee beer, it is representative of revival West Mountain Brewing Company has had in the last three months since Casey Letellier came on board as the brewer. The taps at this brew pub are, for the first time in a while, loaded with West Mountain beers thanks to Casey’s efforts, including West Mountain staples like the IPA and new additions like Meribel (a Belgian pale) and the Double Wheat IPA.

Double IPA, West Mountain Brewing Company – As Fayettebrew already pointed out, brewer Casey Letellier is keeping the taps full at West Mountain. I have enjoyed just about every beer I’ve tried from him so far, but the one that really caught my attention in January was the Double IPA. The style can range from syrupy sweet to dry as a bone, with my personal preference being the latter. Letellier’s version trended towards dry (but not too dry) with some of the pine and dank characteristics that many west coast IPA drinkers have come to love.

Chocolate Ghost, Foster's Pint & Plate – One of the overlooked breweries in Northwest Arkansas is Foster’s Pint & Plate in Rogers. Perhaps more known for its food, Foster’s is putting out some interesting beers thanks to brewer Kyle Brummal. One of those interesting beers is Chocolate Ghost. This brown ale weighs in at 6.8% and 27 IBU, and uses ghost pepper to provide some bite. Subtle sweetness and faint hints of coffee greet you on the front end, with a peppery kick on the backside. Not for the weak or timid!

Barrel-Aged Love Honey Bock, Lost Forty Brewing Company - Love Honey Bock is arguably the most popular beer from Arkansas at the moment, but it's actually not even one of my personal favorites from Lost Forty. So I guess that had me not expecting to like this beer as much as I've ended up liking it, truth be told. This sat in charred oak barrels and it seems to have really toned down the sweetness and added a nice, smooth booziness to it with nice hints of oak and vanilla. The nose has a nice eye-opening whiskey aroma, adding up to just an outstanding brew. Look for this around in cans and at the brewery. 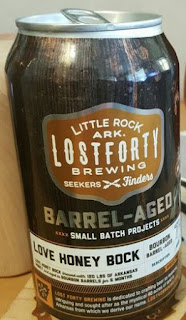 Winter Plow, Rebel Kettle Brewing Company - In their nearly one year of serving beer out of their taproom, Rebel Kettle has introduced some crazy styles and cranked up the hops in some already familiar styles, but it's this Winter seasonal farmhouse-style  brewed with sweet orange peel and ginger that really got my attention lately. It's got a nice spicy finish that leaves me wanting another one while coming in at 7.8% alcohol by volume, it's a bit "sneaky" as well, being just so easy to drink. I guess I should say it would be easy to "get plowed" by this. Ha. See what I did there?

And there you go, the first all-Arkansas Beers To Cheer of the year! Let us know what you think and come back next month for another six-pack!
Posted by Woo Pig Brewey! at 3:25 PM

Email ThisBlogThis!Share to TwitterShare to FacebookShare to Pinterest
Labels: Beers To Cheer