When my friends and I have a beer tasting or just any get-together (which usually turn into beer tastings), the subject almost always ends up on what breweries we'd like to see in Arkansas at some point. Over the years a good percentage of these have arrived on our tap walls and the list has been ever-changing with new breweries popping up across the country every time you turn around. Breweries like Southern Tier, Stone, Sweetwater, Terrapin, Cigar City, Bear Republic, Bells, Oskar Blues, Sixpoint, Yazoo... this list could keep going. We want them all! But there's only so much shelf space, so you have to pick-and-choose-and-hope. We'll never see them all and not having some of these actually makes road trips more fun as you can seek them out and bring some home to share.

We've landed some good ones in our area lately too, there's no doubt about that. Just a few weeks ago Summit Brewing arrived and fully justified their hype, we've got Coop Ale Works very soon and last year saw Evil Twin, Stillwater, Bayou Teche, Green Flash and so many others I can't remember them all.

But a brewery that's always been on our lists is Founders Brewing Co. out of Grand Rapids, Michigan, and we can now remove them as they've landed here with Golden Eagle of Arkansas and will be showing up late March or early April at the latest.

I have been assured there will be a lot of events surrounding the launch, from pub crawls to tap takeovers to dinners and pairings. The only such event that has been released so far is a beer dinner at The Flying Saucer in the River Market on April 3rd (Thurs) and I'm told that your ticket prices to that will include a ticket to Foam Fest on the following night. This should be awesome!

In the meantime, check these guys out:


I'm not big on using ratings from RateBeer.com or BeerAdvocate.com and such sites as I like to make my own opinions, so I'll just tell you my favorite Founders beer in case you're not familiar with them. Personally I think their Porter is one of the best I've ever had. They have a wonderful session IPA called All-Day IPA, an incredible stout called Breakfast Stout and other great beers like Centennial IPA, Red Rye IPA, the deliciously fruity Rubaeus, the scotchy Backwoods Bastard, Curmudgeon Old Ale... damn just typing these names in makes me thirsty. So many great beers. And then of course there's KBS, which is in it's own world. A tasty, ass-kicking world.

To use a phrase from another brewery here, but it just seems so apt... "Here. We. Go." 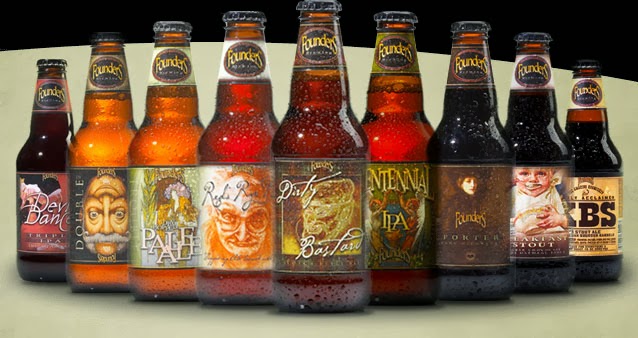