The great brewery invasion of 2014 continues for Arkansas! The latest newcomer to the shelves and bars is Left Coast Brewing Co. It's been pretty hard to get news or updates on this, so a bit of this is secondhand info, but it appears that the launch week will be the week starting June 16th. I have gotten "official word" that there will be a mini-pub crawl of sorts with The Joint and Cregeen's over in Argenta on Thursday, June 19th starting at 6pm. The Joint will have some pint glasses to give away and Trestles IPA on draft. If I can get some more information I'll pass it along on the Twitter feed.

Left Coast Brewing Company is a production brewery based in San Clemente, Ca. The business began brewing for family-owned Oggi’s Restaurant chains in 1991 and has since took off as a separate brewing company in March of 2004.

Their Epeteios Imperial Stout won a gold medal at the Great American Beer Festival in 2013, so definitely cross your fingers for that one landing here.

The Voo Doo American Stout won a bronze at the 2012 World Beer Cup. 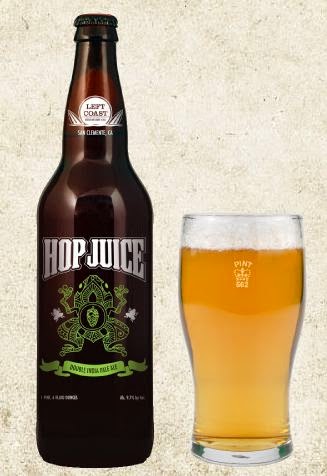 Their most popular beer from what I've seen online so far seems to be the Hop Juice Double IPA. In their words: "This hop monster uses Premium American 2– Row and a touch of light crystal malt to create a solid malt foundation. Five different Hop Varieties are used in the Hop Juice. It spends two weeks dry hopping in fermenter contributing to its great hop aroma. Starts out sweet and finishes with the crisp bitterness of a Double IPA. This drinkable blend will have you HOPPING till nights end." Well I'm not sure about you but I'm totally sold on that one!

So know you know a little. Again, watch the Twitter feed for more as it gets closer. In the meantime, follow these links and also check out the video of a visit to the brewery at the bottom. Cheers!