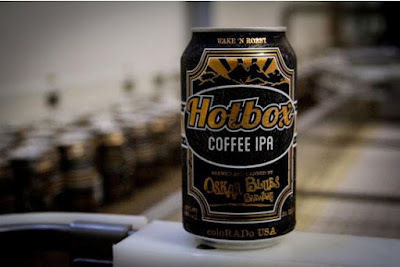 Hotbox Coffee IPA (7.2% ABV, 70 IBUs) combines a burst of pine, citrus and mango from simcoe hops and blends them with a cold brew extract from Hotbox Roasters' Ethiopian beans, which bring cream, blueberry and cocoa notes to the mix. The beans were sourced from a family farm in the East African nation exclusively for this beer.

“We believe the citrus and fruit aromatics of an IPA, derived from the intense hops, pair well with the fruit of the coffee to produce a great, flavor-packed beer,” said head of brewing operations Tim Matthews. “The combination of coffee and hops in the Hotbox IPA serve to compliment and reinforce the delicious flavors and aromas both offer in this match up.”

Since the in-house coffee roasters at Hotbox Roasters share a space in Oskar Blues Brewery’s Longmont facility, it was a no-brainer to go back to the mat and follow up on the fall seasonal, Hotbox Coffee Porter.

“Teaming up with Oskar Blues to make an IPA is a great opportunity to show off the versatility of Ethiopian coffee beans,” said Matt Herren of Hotbox Coffee Roasters.  “I had just 'cupped' this Ethiopian coffee and was blown away by the obvious aromas of fruit: bright cherry, blueberry, and citrus jumped right out of the cup.  Since Tim enjoys Ethiopian coffees I knew the fruit-forward qualities of this particular one would make an awesome IPA.”

Hotbox Coffee IPA will feature as Oskar Blues’ new spring seasonal in cans from March to May; replacing GUBNA Imperial IPA, which will shift to a limited, national draft-only release with 12 oz. cans only available for retail in the ColoRADo and North Carolina Tasty Weasel taprooms.

Hotbox Coffee IPA will be available in all 50 states on draft and in 4-pack 12 oz. cans beginning in March. Beer drinkers looking for a unique mix of uppers and downers can hop on over to oskarblues.com/beerfinder to locate their nearest watering hole or store carrying the new brew.
Posted by Woo Pig Brewey! at 1:06 PM