Little Rock, AR (5/15/2016) - Stone's Throw Brewing announced today its schedule of events to celebrate the biggest week of the year in American Craft Beer. For the 11th year in a row, the Brewers Association has declared American Craft Beer Week (ACBW), the nationwide celebration of U.S. small and independent craft brewers. The weeklong tribute provides an opportunity for craft brewers to share their diversity, creativity and passion for the beverage they love with the greater craft beer community. From May 16 – 22, all 50 states will be holding events including exclusive brewery tours, special craft beer releases, food and beer pairings, tap takeovers and more to celebrate the ever-advancing beer culture in the United States.

“American Craft Beer Week has provided independent beer fans across the country a chance to support their local breweries since 2006. With celebrations happening in all 50 states, this is truly an annual national event that recognizes all those involved in making craft beer from small breweries in the U.S. such a success.” -Julia Herz, publisher of CraftBeer.com and craft beer program director at the Brewers Association

For American Craft Beer Week 2016, Stone's Throw Brewing will be participating in the following events:

Wednesday, May 18, 6:00pm: #BetterWithBeerFreeMovie "Strange Brew" in the taproom

Thursday, May 19, 6:30pm: Arkansas Brewing History #ArkiePubTrivia in the taproom

Stone’s Throw Brewing is the product of four guys—Theron Cash, Brad McLaurin, Shawn Tobin and Ian Beard—who met in the local home brew club, the Central Arkansas Fermenters. After doing most of the work themselves to turn a century old building in Little Rock’s MacArthur Park Historic District into a production facility, they began brewing operations on July 4, 2013 and opened a taproom on August 1, 2013. Stone’s Throw Brewing specializes in small-batch, artisanal beers that are both creative and drinkable.

The Stone’s Throw Brewing tap room is open to the public Tuesday-Thursday, 4:00-9:00 pm, Friday 4:00-10:00pm, Saturday 12:00-10:00 pm, and Sunday 11:00 am-9:00 pm. The tap room features different food trucks each day and offers all night happy hour on Wednesdays, #ArkiePubTrivia at 6:30pm on Thursdays, new beer releases every first Friday of the month (and any other Friday we feel like), free brewery tours at 1:00pm and beer infusions at 4:00pm on Saturdays, and beer to go on Sundays. Current beer selection, food truck schedules, and upcoming events can be found at www.stonesthrowbeer.com, on Facebook at StonesThrowBrewing, Twitter @stonesthrowbrew and Instagram @stonesthrowbrewing. 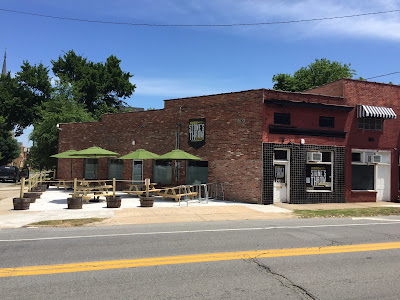