North Little Rock, AR, May 10, 2016 – For the 11th year in a row, the Brewers Association has declared American Craft Beer Week (ACBW), the nationwide celebration of U.S. small and independent craft brewers. The weeklong tribute provides an opportunity for craft brewers to share their diversity, creativity and passion for the beverage they love with the greater craft beer community. From May 16 – 22, all 50 states will be holding events including exclusive brewery tours, special craft beer releases, food and beer pairings, tap takeovers and more to celebrate the ever-advancing beer culture in the United States.


“American Craft Beer Week has provided independent beer fans across the country a chance to support their local breweries since 2006. With celebrations happening in all 50 states, this is truly an annual national event that recognizes all those involved in making craft beer from small breweries in the U.S. such a success." - Julia Herz, publisher of CraftBeer.com and craft beer program director at the Brewers Association 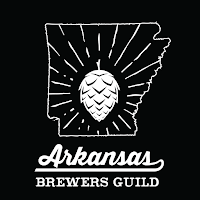 The Arkansas Brewers Guild gets a head start on ACBW with a series of events in the Argenta Arts District May 13-15. Breweries from around the state will converge for a weekend long ACBW kickoff party: Tap Takeover at Flyway Brewing Friday night, Beer Garden at Legends in Argenta Saturday night, and Brewers’ Brunch at Skinny J’s Argenta Sunday morning.


“The local brewing community is jumping fully into the phenomenon that is American Craft Beer Week by starting a few days early! The Arkansas Brewers Guild is excited to put on an entire weekend of events all within a few blocks of each other in Argenta that will lead into everything member breweries have planned for ACBW.” - Ian Beard, President Arkansas Brewers Guild 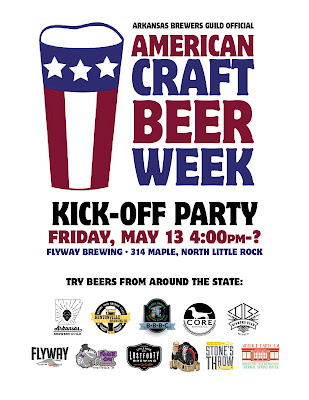 “We are so pumped to have so many of our fellow brewers in one place enjoying a pint with the craft beer community! Despite being competitors on paper, we all love to get together and talk shop and everyone is always willing to help out when you need them.” -Matt Foster, Brewer Flyway Brewing 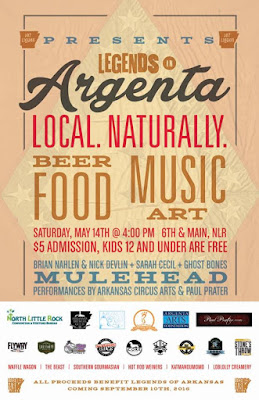 “The Legends in Argenta beer garden is a joint effort between the Arkansas Brewers Guild and Legends of Arkansas that promises to be a huge draw for festival goers. With Mulehead as the music headliner and so many great local products available, Argenta is the place to be Saturday night!" -Susie Cowan, Executive Director Legends of Arkansas

Craft beer enthusiasts are encouraged to join the Arkansas brewing community for brunch Sunday, May 15, from 10:00am-3:00pm at Skinny J’s Argenta located at 314 N Main St., North Little Rock. Skinny J’s features only Arkansas beers on tap, making it an ideal spot for Guild members to share fellowship before heading home for a full week of ACBW activities at their own breweries.

The Arkansas Brewers Guild is organized to promote, in every lawful manner, the common interests of the members of the brewing industry in Arkansas. It is recognized by the Brewers Association as the official trade group for the industry in the state. The Guild operates as a non-profit corporation and pursues its mission through public events, industry initiatives, and governmental action. Find out more about upcoming Guild events at https://www.facebook.com/arkansasbrewersguild