With all the social media these days, I'm not sure how distributors are letting these breweries get into our state without anybody knowing, but they sure seem to be still. Or maybe I've just missed this one. But hey, that's why I started this blog and my Twitter feed to begin with... to get beer information to the thirsty! And for free! So here's the skinny on a brewery from my 2nd favorite state, Missouri, which I just spotted on the shelves this past week. Check out Public House Brewing, which has 2 locations in both Rolla and St. James, in the wonderful show-me-state. It's already home to some of my favorite breweries like Piney River, Mother's, Urban Chestnut, Four Hands and Boulevard and just FYI... I was born there (Missouri, not at a brewery). 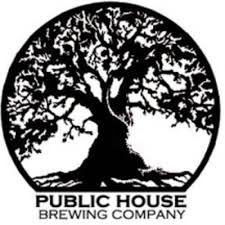 I do know they'll be pouring at Little Rocktoberfest in Little Rock tonight if you want to try out some of their brews. I've seen Revelation Stout, Rod's Cream Ale, Elusive IPA and Hide And Seek Hefe on shelves and will be having my own private tasting soon. I'm personally not a big fan of trying new beers at festivals, preferring to sit down with a full brew and take my time rather than tossing back 3 oz and moving on to the next one. I see the stout won a Gold Medal at the 2015 LA International Beer Festival and the cream ale won a Gold Medal at 2015 Best of Craft Beer Awards. Let me know your thoughts if you try some yourself.

There's a great story about how Public House Brewing came together on their website which is well worth a read:

"In 2010, Josh & Beth Stacy and Josh & Trisha Goodridge--longtime
friends--opened Public House Brewing Company in Rolla, MO, the town's first brewpub.  But it was a long, long time in the works.  Like any business, there were big ups and downs on the road to the first pour and we think that story is worth sharing.  So here goes.... click here for full story."

And here's a nice little introductory video I found on their website for you peeps who don't like to read (you know who you are):

"The good folks at the Missouri Division of Tourism spent the day with us back in May to get the Public House experience. Missouri is home to so many great breweries and they chose a few to represent the state on their website. Public House is one of the featured breweries. Check out the awesome write-up and YouTube video they put together about us."
Posted by Woo Pig Brewey! at 8:20 AM