We are pretty spoiled up in Fayetteville and Northwest Arkansas. There are now five breweries now in full production and a sixth one looking like it will join the community sometime early in 2015. This year, Bike Rack Brewing joined Core Brewing, Fossil Cove Brewing, Ozark Beer, and Saddlebock Brewery in the collection of local breweries located in Fayetteville, Springdale, Rogers, and now Bentonville. As for the sixth brewery, after a few quiet months, it now looks like Columbus House Brewery in Fayetteville is planning open in early February 2015. However, before we get there, let's take a look back at this past year of beers, expansion, and events from the local breweries in Northwest Arkansas!

The folks at Bike Rack spent the first nine months of the year completing construction, securing licenses, and brewing pilot batches. Since then, they have wasted little time hitting the ground rolling and serving some fresh brews out of their Bentonville brewery. October was the big month for Bike Rack as they prepped their operation with a series of soft openings before a big Grand Opening Weekend to introduce themselves to the community.  As they get going, they have focused on releasing four foundational beers so far: their "FAST IPA", "Slaughter Pen Pale Ale", an American Stout, and "Urban Trail Golden Ale". 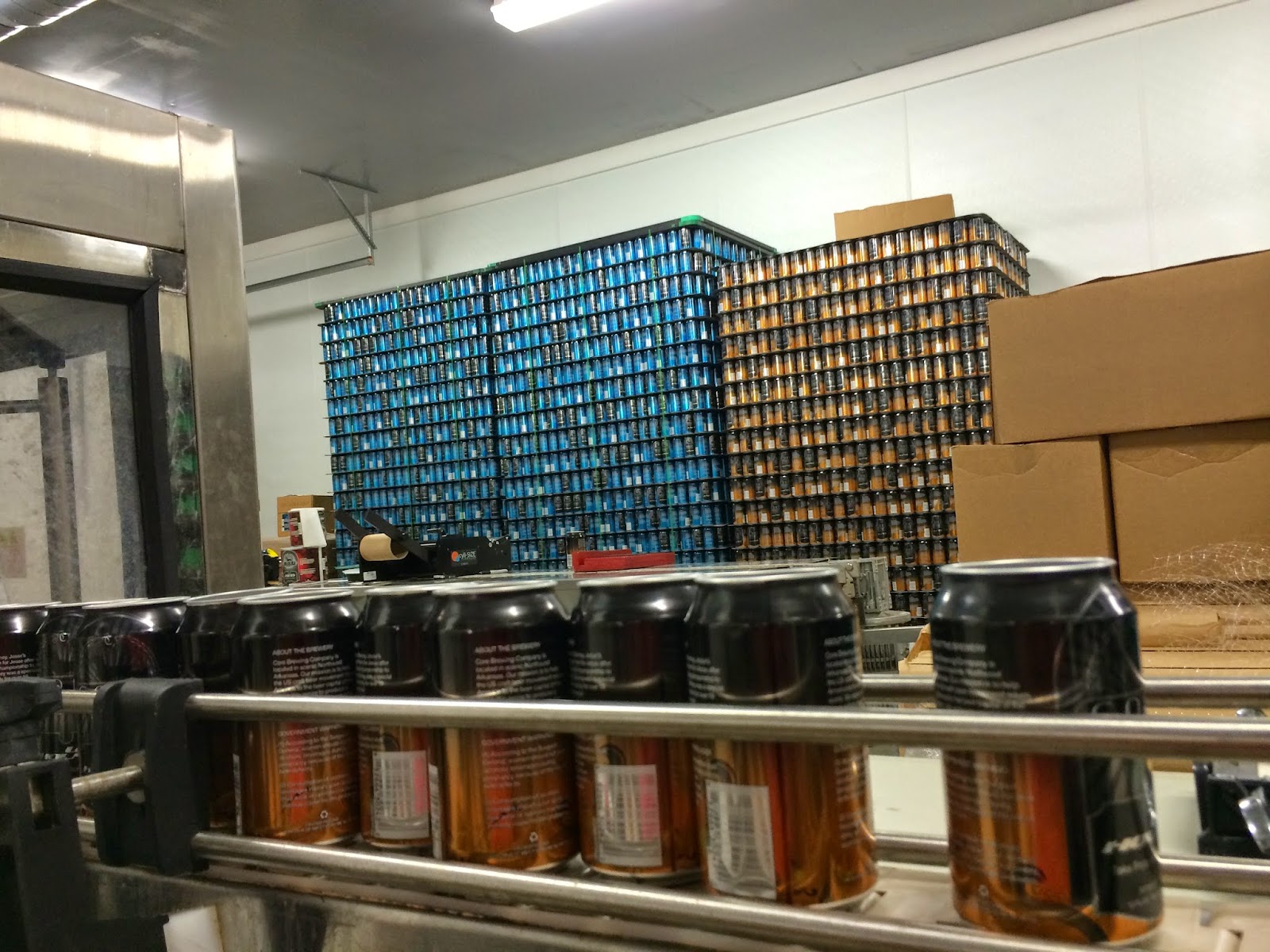 Core’s growth continued in 2014, including one big new addition to the company. Now well established in the Northwest Arkansas area, Core hosted a trio of tap takeovers in January and would continue to host a variety of events throughout the year, including some brewmaster beer dinners with local restaurants. February brought an expansion to Core’s canning program as their Leg Hound Lager joined their ESB as being packaged in six packs of cans (the Behemoth Pils would later join the can retail lineup in June). In addition to participating in the St. Patrick’s Day on the Hill AR Stout Championship in March, Core won Little Rock-based Sync Weekly’s People’s Choice Bracket in their Craft Beer Tournament, which pitted local and regional brews against each other in a March Madness-style tournament voted on by Sync readers. The month of May saw Core heavily involved within the Fayetteville city limits as they participated in Foam Fest (bringing barrel-aged versions of their Oatmeal Stout and Imperial Red) and they hosted their own beer garden at the Block Street Block Party. The biggest news from Core came in September when they opened their Core Pub in Rogers, AR. The pub is a separate location from the company’s Springdale brewery and features 12 taps dedicated to Core’s brews. Then in October, Core was one of four Arkansas breweries to attend the Great American Beer Festival in Denver, CO. In November, both the brewery and the pub locations added a English-style hand-drawn ale tap and begun a weekly Firkin Friday program of releasing special limited release. Recent Firkin Friday releases have included a Double Chocolate Imperial Stout with vanilla beans and coffee and a Wassail. To give back at the end of a busy 2014, Core hosted a Toys for Tots donation drive at both the pub and brewery locations, offering discounts on pints for those who made a donation. 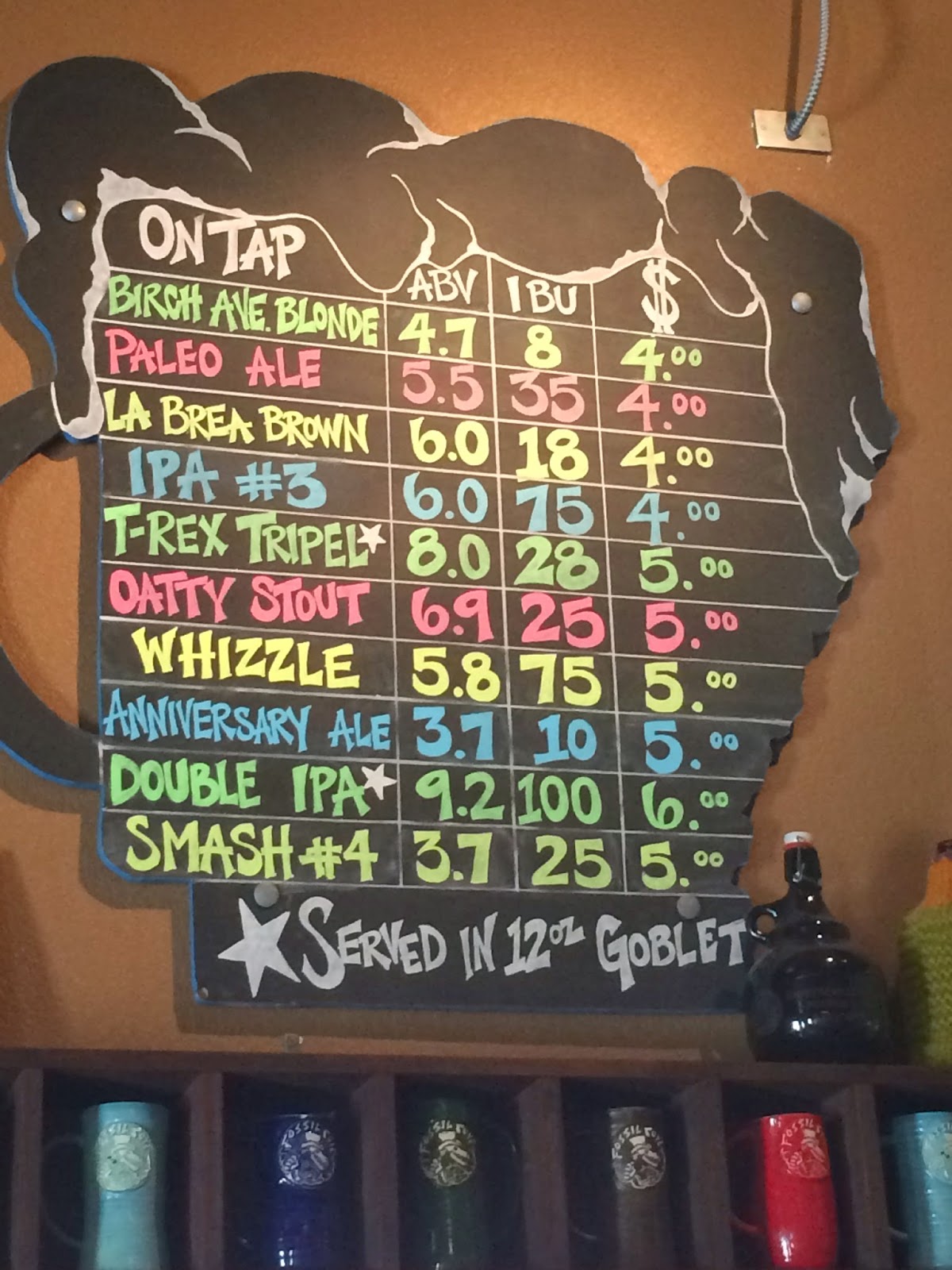 Consistently exploring new styles, introducing new rotating series, and tinkering with fun Randalls/ infusions, Fossil Cove kept local craft beer enthusiasts busy with a creative lineup. They kicked off the year with the debut of their SMaSH series in January. By the end of the year, Fossil Cove had already rotated through seven versions of these single malt and single hop brews. In February, Fossil Cove co-hosted a rare event outside of their brewery walls - a Flight Night at Maxine’s Tap Room in Fayetteville. March brought the addition of a nitro tap to the brewery and the start of what looks to be a recurring Fossil Cove event: the crew from the Cove recruited volunteers for a clean-up along the Skull Creek Trail which runs near their brewery. The month of May was perhaps Fossil Cove’s busiest month in 2014. They hosted a release party and screening for the documentary about craft beer in Northwest Arkansas “Tapping the Ozarks” and co-sponsored two music stages and a beer garden at the Block Street Block Party. Then, to top it all off, Fossil Cove not only participated in the Fayetteville Foam Fest but also took home the People’s Choice Award for top brewery at the festival. Things did not slow down the rest of the year through: June brought the celebration of Fossil Cove’s second anniversary; in September they debuted a stainless steel growler for to-go orders; and in October they started their “Throwback Thursday” series with the release of the 2013 Pumpkin Ale which had been aged for a year on oak and vanilla beans.To round out a busy year, in November Fossil Cove played host to the first Arkansas Brewers Guild Tap Takeover event, which showcased nine Arkansas breweries. 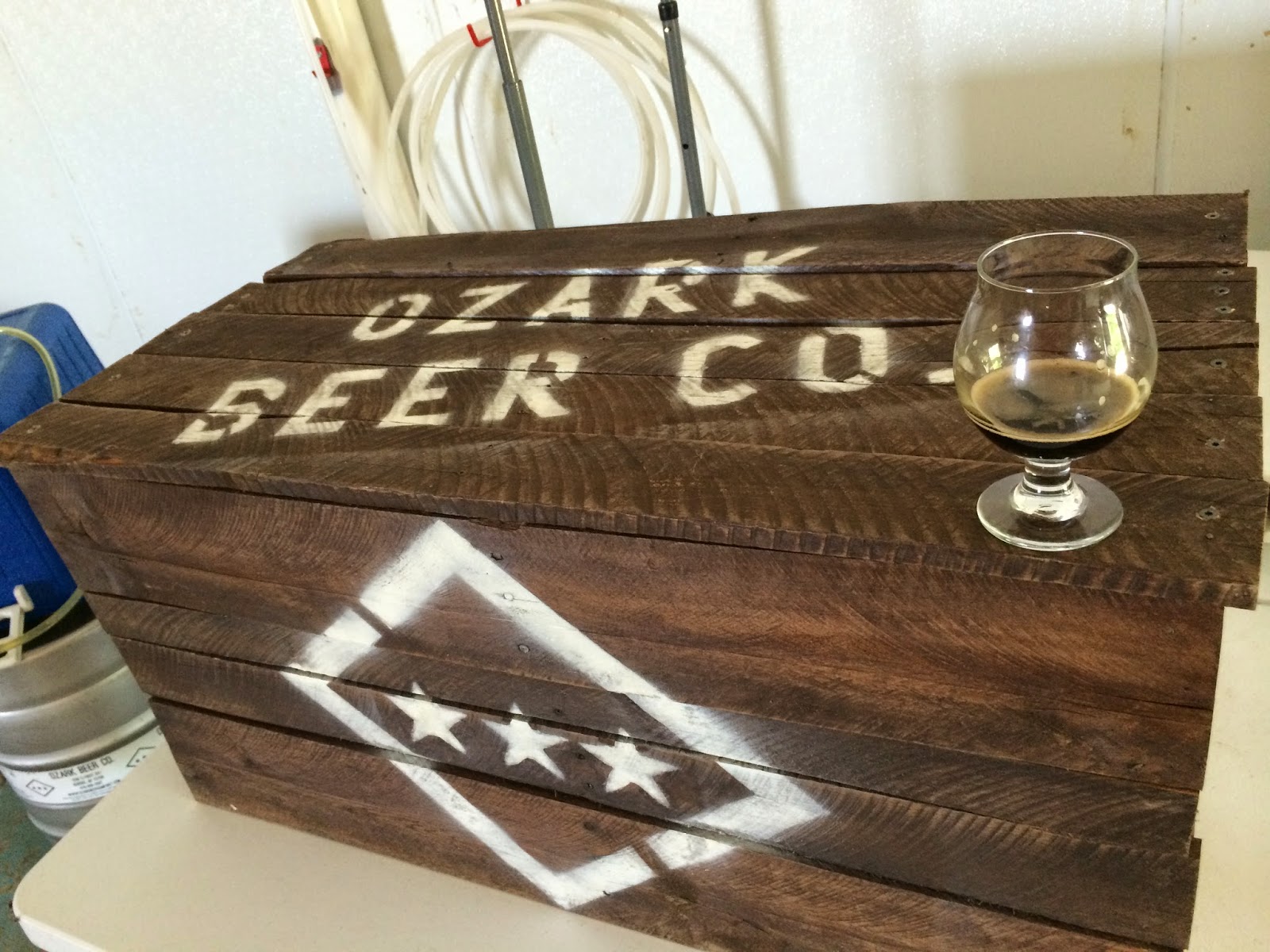 Over the course of their first full year of production operations, Ozark Beer Company quickly carved out a well-regarded niche in the Arkansas beer community. While they have stuck with their starting lineup of their Pale Ale, American IPA, Cream Stout, Golden Ale, and Onyx Coffee Stout (which was promoted to year-round regular after its initial run) since their opening, the OBC team began working in some limited releases in the second half of the year. The first half of 2014 was largely dedicated to the expansion of production at the brewery, although Ozark did partner with some other local businesses for special sale promotions. Like some of the other breweries in the area, 2014 kicked into high gear in May for Ozark: they started off by hosting a Red Cross relief fundraiser at the brewery for those affected by tornado damage in central Arkansas during the spring; they then participated in their first Fayetteville Foam Fest; they were officially added to the Fayetteville Ale Trail program; and began releasing Pale Ale in six packs of cans (they sold out of their first batch the day it was released). May also had some recognition come Ozark Beer Company’s way when they were named Southern Living’s Favorite Arkansas Beer. June and July saw a pair of events from the Ozark team - a tap takeover at Gusano’s pizza and Ice Cream Social (featuring ice cream made by Pure Joy Ice Cream using the Ozark Golden Ale and Cream Stout) hosted at the brewery. They hosted a second social in August. Prior to celebrating their first anniversary in November, Ozark expanded their fermenter capacity in September. Ozark Beer Company wrapped up 2014 nicely with a pair of events: they continued to make charitable contributions to community by hosting a NWA Food Bank fundraiser at the brewery by donating a portion of their pint and growler sales and they were a sponsor of the Little Craft Show in Fayetteville where they also hosted a pop-up taproom. Also in December, Paste Magazine listed Ozark’s Pale Ale can as one of the “Best Beer Can Designs of 2014” (the can was co-created with local studio BLKBOXLabs).

Outside of their regular lineup, some standout beers from Ozark in 2014 included: their Belgian Golden infused with hibiscus, raspberry, and rose hips; their mango and chamomile-infused Belgian Golden; their Fresh Hopped IPA; and their Extra Pale Ale. 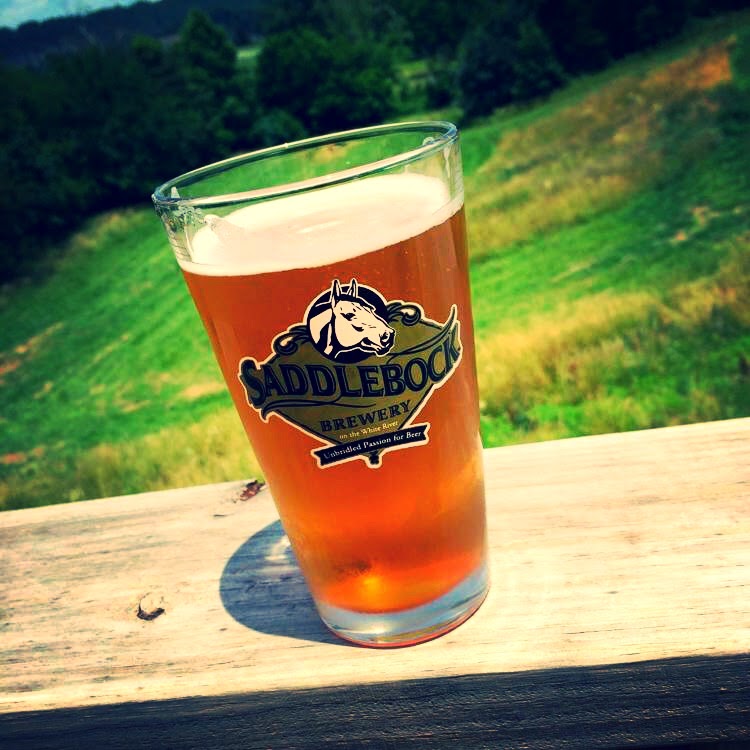 Regularly pouring about 15 or more beers on tap out at their brewery, perhaps no local brewery more ardently explores different beer styles than Saddlebock. To keep up with that level of production, Saddlebock completed two big expansion projects in 2014. The first came in July when they expanded to add two 30bbl fermenters to their brewery. Later in the year, in November, the second project was completed: the opening of a new tasting room out at the brewery. Saddlebock stayed busy with events as well. In addition to hosting multiple tap takeovers in Northwest Arkansas and in the River Valley area, Saddlebock participated in the following Fayetteville craft beer events: the previously mentioned St. Patrick’s Day on the Hill beer garden, Ales and Tails, Fayetteville Foam Fest, First Thursday, and Brews and Brats. In March, Saddlebock participated in a panel event on craft beer at Crystal Bridges and in July they co-hosted the White River Rendezvous with Fayettechill. October was probably Saddlebock’s busiest month; they attended the Great American Beer Festival for the second time; hosted their second anniversary party; and launched their mobile party barn service for events.

Over the course of the year, Saddlebock received a variety of awards and recognition. At the St. Patrick’s Day on the Hill celebration in March, Saddlebock took home the Arkansas State Championship. Then, in April, Saddlebock Brewery’s owner Steve Rehbock received an Arkansas Eco-Hero award for Saddlebock’s operations, including being the first sustainable brewery on a septic system in Arkansas. Lastly, in July, Saddlebock was recognized as Flipkey/ TripAdvisor’s “Top Brewery Worth Travelling To” in Arkansas.

Some standout beers from Saddlebock in 2014 included: the Maibock; the Oktoberfest; the IPA; and the Bourbon Vanilla Oak Porter.


As 2014 closes out, fans of locally brewed craft beer have a lot to look forward to in the new year thanks to the collection of breweries and brewpubs in Northwest Arkansas. This is a young, growing brewing community that will continue to treat its patrons to an expanding selection of beers as well as events and community outreach projects that will strengthen the roots each brewery/ brewpub has established. If you have not made your first visit to the local breweries in this area (or it has been a while since your last visit) I highly recommend setting aside time for a trip in 2015.

Here is to a great year in locally brewed beer and having even more to celebrate this time in the next!
Posted by Woo Pig Brewey! at 2:14 PM