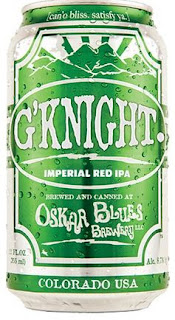 First canned in 2005, this behemoth of a beer pays liquid tribute to Gordon Knight, a Colorado craft beer pioneer and decorated Vietnam vet who died in 2002 fighting a massive wildfire outside of the brewery's hometown of Lyons, CO. Great American Beer Festival medal-winning G’Knight Imperial Red IPA (8.7% ABV, 60 IBUs) is a hefty, dry hopped imperial red IPA with a nose full of aroma, a sticky mouthfeel, a malty middle, and mighty hop flavors. It sports a surprisingly smooth finish for a beer of its size.

“Gordon inspired everyone with his passion for life and crafting challenging beer flavors that really pushed the limits of hops in those early days. I still remember the day I met him, riding my bike between jobs in Boulder I rolled past a storage unit Gordon was brewing beer in. It was the first time I realized people do this for a living and I knew this was what I wanted to do,” said Dale Katechis, Soul Founder of Oskar Blues Brewery.

“We want to get G’Knight & Gordon’s legacy into more craft beer drinkers’ hands while we hoist one back and celebrate a true craft beer pioneer,” Katechis said. As the can says, “If you knew the man behind this tribute, this dry-hopped ale needs no explanation. If you didn’t, we’re sorry.” Read more about the life and craft beer legacy of Gordon Knight here: www.N3978Y.com

To keep up with all things Oskar Blues, visit http://www.oskarblues.com/.
Posted by Woo Pig Brewey! at 10:42 AM