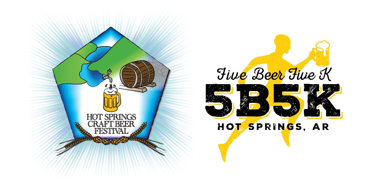 The Hot Springs Craft Beer Festival is pleased to announce the inaugural running of the Five Beer Five K on May 20th, 2016.  This fun run down historic Central Avenue in downtown Hot Springs is part the HSCBF celebration of American Craft Beer Week.

The runners will gather in preparation for this run at The Farmers Market and at the starting gun will head from there up Central Avenue.  The course then takes them to the door of The Copper Penny where they partake in the first beer of the run.  Now don’t worry, they’re not drinking a full pint.  From there the runners will gaze upon the majesty and beauty of Bathhouse Row as they make their way to the next stops which include Vina Morita and Fat Jacks at the north end of Central Avenue.

From there it’s the long trek back to The Farmers Market where they get to enjoy a full size beer, live music, and fellowship with the group.  When the fun there is over the runners will be free to revisit the stops on the run for a more in-depth experience.

For the modest registration fee of $40 the entrants will, in addition to enjoying the run, receive an inaugural edition of the 5B5K shirt and a general admission ticket to the Hot Springs Craft Beer Festival.  Runners can register at runsignup.com. Non-runners are invited to watch the run and enjoy the festivities, and there is no admission charge to the post run area, but of course, one must be 21 or older.

The HSCBF will be held on Saturday, May 21st at The Hot Springs Convention Center.  This will be the third year for this rapidly growing festival which was named The Best New Festival by the Arkansas Hospitality Association in 2014.  Funds raised by the HSCBF will go towards the Spa City Blues Society’s efforts to promote the American music genre known as the blues and involve our youth in music.

For more information on the 5B5K and the Hot Springs Craft Beer Festival go to www.hscraftbeerfest.com.  More about the Spa City Blues Society can be learned at www.spacityblues.org.  And if you’re interested in American Craft Beer Week go to www.craftbeer.com.  Or you can call Rob Pratt at 501.463.7190.
Posted by Woo Pig Brewey! at 7:29 AM