WooPigBrewey: Here's another excellent entry from our northwest Arkansas beer hero Fayettebrew, who for some reason just decided to take it upon himself to declare his own Arkansas Beer Month in February and then went out and did something about it. Crazy kid! I'll let him fill you in below on his adventures for the month below and click on the "Fayettebrew" label for more of his work right here on this blog. 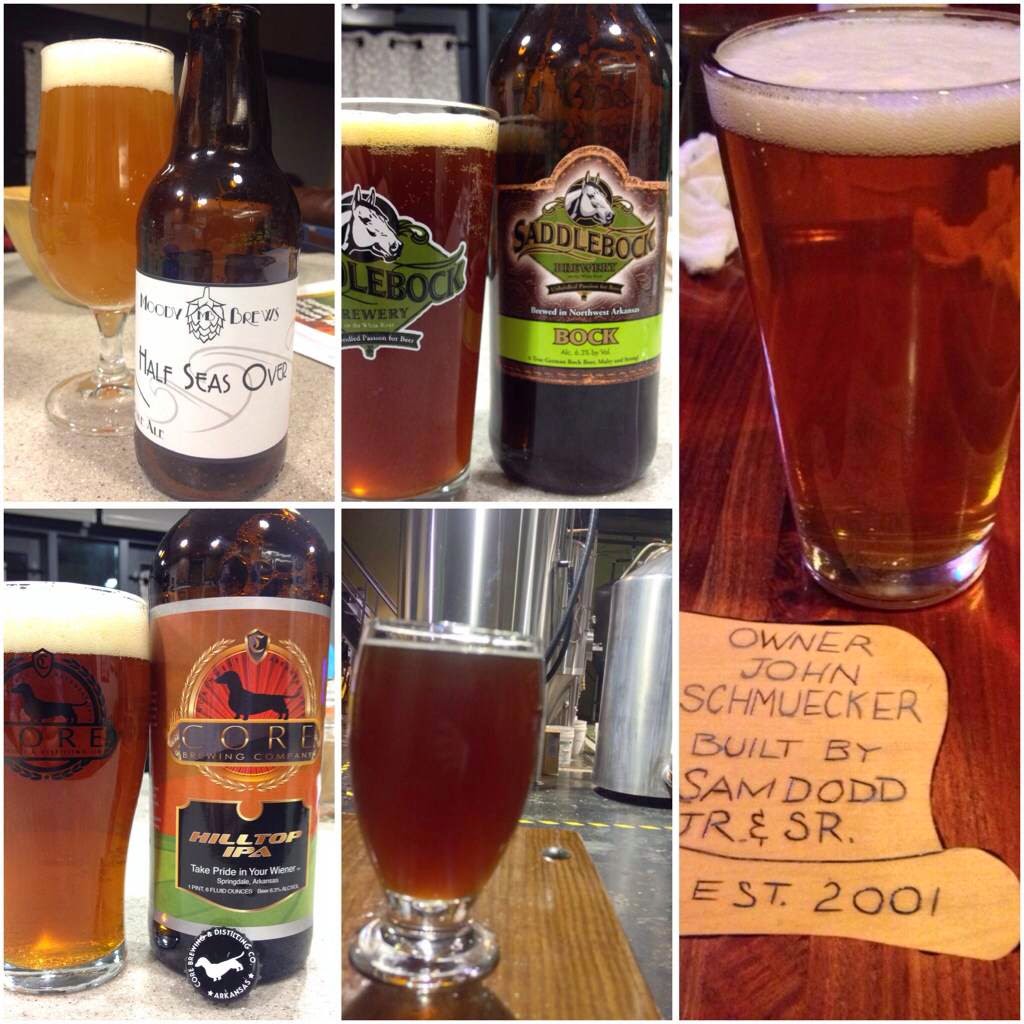 Looking for an adventurous beer-related project to take on early in the new year, I decided to create my own “Arkansas Beer Month”: over the course of the month of February, I was going to dedicate myself to only drinking beers brewed in Arkansas (or by Arkansans with an Arkansas-only distribution). To further diversify this project, I set the complementary goal of enjoying at least 28 different Arkansas beers by the end of the month. For a beer to count toward this total, each beer would have to be a standard, full pour as it would be served at the brewery's tap room (so no beers from flights or samples could be included in the 28 count).

Now my overall experience did have some limitations. Living in Fayetteville, I do not have access to many of the beers from central Arkansas, aside from a nice selection of beers from Diamond Bear, so most of these reflections will pertain to the breweries and brewpubs of Northwest Arkansas. A weekend visit to the emerging Little Rock Hop District will be a nice addition when I repeat this project next year. Travel also factored into the other main limitation. The grand finale of my Arkansas Beer Month was to be a two day tour of all the Northwest Arkansas beer producers. However, thanks to a recent winter storm from Mother Nature, day two of this event was cancelled which kept me from making a trip to Bike Rack Brewery (and trying their new Biere de Garde). This was the only local brewery in my neck of the woods I was unable to visit.

Weather and distribution aside, here are 28 thoughts from 28 days of my Arkansas Beer Month:

1) To offer a final reply to a comment passed my way a few times over the course of the month: I never felt like I was missing out on what was available from the rest of the country while focusing only on Arkansas beer. I attribute this to two factors:

2) First, the recent growth in retail and draft accounts among northwest Arkansas breweries and brewpubs. In addition to the retail offerings of Core, Ozark, and Saddlebock (including the latter two’s availability at local Harp’s grocery stores) more and more local bars and restaurants are featuring Arkansas beer from those three breweries as well as Apple Blossom, Bike Rack, and Fossil Cove. Some of these places are even exclusively featuring Arkansas beer, such as Fayetteville’s Hammontree’s Gourmet Grilled Cheese and the recently re-opened Cork and Keg bar.

3) Second, while it is easier than ever to enjoy a nice local beer while out for dinner or drinks, the excellent on-site taprooms of these breweries has created its own niche in the bar scene. These taprooms are a great spot for folks both new and familiar with craft beer to explore different styles and revisit old favorites. More often than not, if I’m going out for a drink, I’m going to a brewery’s tap room or to the local brew pub.

4) My final count was 31 different Arkansas beers in 28 days. (On twitter I realized I counted each of my two pints of Moody Brews’ Half Seas Over and Sixes & Sevens twice, which bumped my total there to 33 beers in 28 days.) You can find a brief account of each of these 31 beers by searching “@fayettebrew #ARBeerMonth2015” on twitter.

5) A few beers that were sampled but not included in the full count were: Core’s EXP (a refreshing, hopped-up version of the ESB now going by the name “Hard Way APA”) and Fossil Cove’s Quad (which was fun to taste side-by-side as a more complex partner to their T-Rex Tripel).

6) Between Arkansas’ two major local beer markets (Little Rock and NW AR) there is still too little crossover. I certainly recognize that our local beer communities are very young but I would love to see some of the smaller breweries/ brewpubs in these two communities figure out an “keg exchange program” of sorts to help get their beers into both markets. As both of these communities grow, events like the Arkansas Brewers Guild Tap Takeovers will only continue to whet our appetites for beers in these currently disconnected markets.

7) Embrace the dark side or go back to basics with Saddlebock. In their earlier days, their focus was Euro-influenced brews and these styles, such as their bock, hold their own stylistically. Meanwhile, their stouts (such as the Java Stout) are quite robust.

8) Saddlebock’s Vanilla Oak Bourbon Porter (retail name “Winter Daze”) is perhaps one of the more complex beers they have taken on and it is also their best new release in a while; it is really good.

9) The tap room expansion at Saddlebock really brings the barn together and the near-finished patio addition will only enhance what a great venue it is, particularly from spring through fall.

10) Diamond Bear may be overlooked as a key gateway brewery for new craft drinkers in the state. Their blonde and pale ale both have the wide availability and clean flavors to get beer drinkers away from macro habits.

11) Similarly, Diamond Bear’s Dogtown Brown lager may not hit the spot for more seasoned palates but it is a unique twist on the brown ale style and hits its marks. A great “next step” beer for those just getting into local beer - especially if they are hesitant about darker styles.

12) Moody Brews’ Half Seas Over is so consistent and its smooth tropical fruit flavors make it an imperial IPA that does not “brag” about its hops or abv.

13) On the other hand, there may not be a more amorphous Arkansas beer right now than Moody Brews’ Sixes and Sevens - the flavors stand out differently with each taste and, as it warms up, it becomes a really supple beer to enjoy. All of this makes for a very intriguing beer.

14) Winter is when you will find Fossil Cove at its most creative - a coffee IPA, a quadrupel, an imperial stout with grains of paradise (brewed by assistant brewer Kort Castleberry), a rye IPA (developed from recipes from assistant brewers Kort Castleberry and Tyler Horne), a session stout, a sour red, and a DIPA have all available at the Cove’s tap room in the last 4 weeks.

15) Fossil Cove’s easy-to-access water tap in their tap room (dutifully named “H2Izzle”) may be one of the most underrated taproom feature in the state.

16) It was hard to imagine that sours would continue to receive little attention but with the intensive time and resources these beers take to create, it was also difficult to see where breweries would be able to make time in their schedules to complete one. Over the course of the month both Fossil Cove (Sour Red) and Apple Blossom (Sour Saison) released sour beers. Each demonstrated the range of flavors possible within the style and with Fossil Cove’s announcement of their Ozark Sours, local beer lovers will have some future opportunities to continue to explore that range.

17) At West Mountain you are currently likely to find only two to three house beers on tap but, under the brewing skills of Ryan Pickop who came on a brew master in November, longtime favorites like the brown ale and IPA are as good as ever.

18) If you only have time to make one stop in Fayetteville to try local beers, make that stop at West Mountain. In addition to their own house beers, they regularly carry beer from Fossil Cove and Ozark Beer Company. Bonus? Pizza and beer.

19) The Core Pub in Rogers is a great venue with a good mix of Core’s mainstays and more adventurous brews, making it a great spot for groups with a wide range of craft beer preferences.

20) Speaking of those more adventurous Core brews, when I visited the pub it had a nice tap list including the recent Firkin Friday release, a new release developed from an earlier firkin (the Hard Way APA), as well as a creative one-offs (the Jenny Sue 22 variation of the 2X Red IPA). A few months into teaming up, the partnership of Jesse Core and Nathan Traw is bringing an aggressive new slate of beers to Core.

21) Core has recently released a new logo that is a lot cleaner without losing the distinctive elements of the brand. Core always stays pretty active so I am intrigued to see how this logo is incorporated into their retail cans and bombers as well as their tap handles. 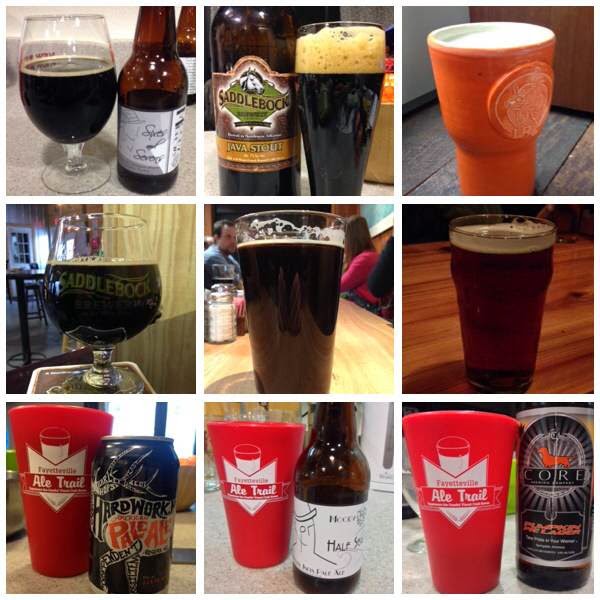 22) It should go without saying that there are a lot of great people and ambassadors among the local Northwest Arkansas brewery staffs but someone who consistently stands out as one of the most gracious and generous is Lacie Bray, Ozark Beer Company’s Business Manager. Just wanted to slip in a quick kudos to someone who deserves to be noticed as a great Arkansas beer ambassador.

23) Speaking of Ozark, if an Arkansas brewery is going to find a niche as a great stout producer it very well might be them. In addition to their stellar year-round Cream Stout and Onyx Coffee Stout, this past month they did a tasting event featuring a Chocolate Mole Stout and a Mint Cream Stout - both of which were a lot of fun to drink. And if you have had the opportunity to pay them a visit lately, you likely noticed a few racks of barrels labelled “DCS” - Double Cream Stout.

24) After finishing another growlette of the aforementioned Ozark Cream Stout this month, I am really hoping for it to be one of the next Ozark beer to be canned. Maybe featuring the endangered Ozark Big-Eared Bat in the design?

25) It happened without a lot of fanfare but Apple Blossom Brewing Company is no longer limited to being on draft at their brewpub. In addition to being featured at sibling business Smoke and Barrel, ABBC is now a regular at many restaurants and taprooms in Washington and Benton County.

26) However, do not misconstrue Apple Blossom’s broader availability with any resulting drop in variety or quality at the brewpub. In addition to tapping new beers like the aforementioned Sour Saison, ABBC  has been regularly breaking out some pretty creative firkins on the weekends - Fayetteweisse Banana Nut Bread (with banana, cinnamon, nutmeg, and vanilla bean) anyone?

27) Congrats to @moJO_SHabby on also completing the Arkansas Beer Month project! He is new to the area and used the month to further explore local beer, enjoying 33 different Arkansas beers over the course of February. Way to go!

28) Local beer is great but local beer with friends is always better - thanks to everyone who joined me for a pint or shared a growler with me over the course of my Arkansas Beer Month! 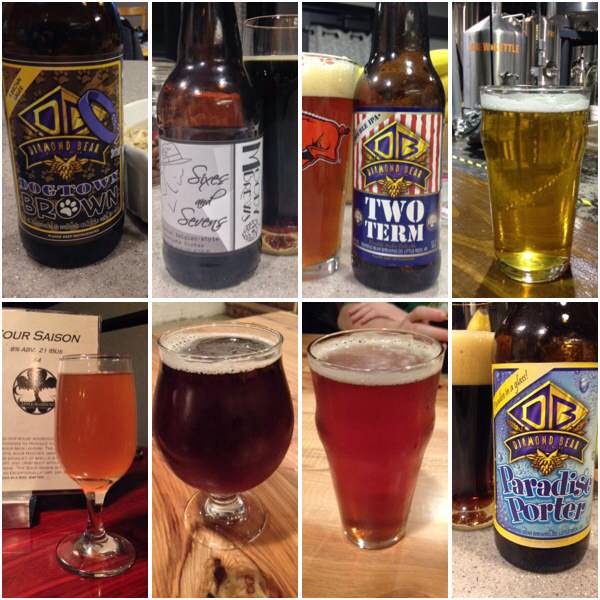 Email ThisBlogThis!Share to TwitterShare to FacebookShare to Pinterest
Labels: Fayettebrew