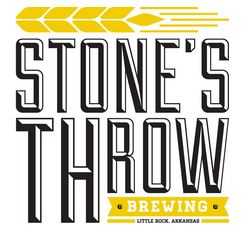 Little Rock, AR, July 18, 2018 – Downtown Little Rock’s Stone’s Throw Brewing announced plans for their fifth annual Block on Rock Birthday Bash today. The street festival is a celebration of the brewery’s opening in 2013 and involves local food trucks, breweries, entertainment, and community groups. Block on Rock is on Saturday, July 28 from 4:00-10:00pm on the two blocks of Rock St. north of the brewery’s location at 402 E 9th St in Little Rock.

“We love the way this little street festival has grown over the past five years! It’s by far the biggest event we do at Stone’s Throw, and this year we were able to really take Block on Rock to the next level with the help of sponsors like Arkansas Rice, Fassler Hall, and Dust Bowl Lanes & Lounge. The outpouring of community support we get each year has meant a great deal to us.” ~ Ian Beard, Managing Partner Stone’s Throw Brewing

Admission to the block party is $5. Discounted armbands are available at the Stone’s Throw taproom for $3 from July 24-27. A portion of all revenue benefits Preserve Arkansas, the only statewide non-profit organization focused on preserving Arkansas’s architectural and cultural resources. The 2017 Block on Rock raised approximately $4,500 for the group.

1200 people attended the first Block on Rock in 2014 taking planners completely by surprise. Since then organizers have more than tripled the festival area to include two blocks of Rock Street and the Pike-Fletcher-Terry Mansion Lawn.  The expansion allows more space for vendors such as food trucks, and a larger stage for musical acts.  Nearly 100 people staff the festival, ensuring easy entry at the gates and short waits for refreshments.  In addition, this year’s event features Arkansas Rice as the presenting sponsor.  Their assistance provides more promotional opportunities and a higher level of experience for festival goers. This year attendance is predicted to break 2,000.

“Consumers are increasingly interested in the entire farm to table process including from grain to glass, and our partnership with Stone’s Throw is an excellent opportunity to tell that story. Arkansas is the top rice producing state and this local collaboration is a natural fit for us.” ~ Lauren Waldrip Ward, Executive Director Arkansas Rice Federation

Both the 700 and 800 blocks of Rock St., located adjacent to the brewery, will be closed off for the event. 3 entrance gates will provide access: the JohnTheBeerSnob.com Gate at 7th St, the North Bar Gate at 8th St, and the Eagle Bank Mortgage Gate at 9th St.  Entertainment is sponsored by Fassler Hall and Dust Bowl Lanes & Lounge, with the mainstage located just a few yards northwest of the brewery on Rock St. The Big Dam Horns will perform two sets at 5:00 and 8:30pm, and The Creek Rocks play at 7:00pm; Arkansas Circus Arts will also feature a special “after dark” performance at 8:30pm.  Fassler Hall will also host the official Block on Rock After Party after the event ends at 10:00pm.  Trees and buildings provide ample afternoon shade in the festival area, and attendees are encouraged to bring chairs.

“Having Fassler Hall and The Dust Bowl as partners this year really lets us step up our entertainment game.  A larger, covered stage provides a better experience for the bands and a bigger sound for the fans. The Big Dam Horns have enjoyed playing Block on Rock the past couple of years and it’s great we can play again in 2018; we’re looking forward to what Arkansas Circus Arts has to offer during the after dark set. We’ll keep it funky for a good ole fashion street dance all night long!” ~ Theron Cash, Managing Partner Stone’s Throw Brewing & Bassist Big Dam Horns

This year continues the partnership with the Arkansas Arts Center with the Terry House Lawn & Marketplace. The grounds of the mansion will be part of the festival area creating a giant biergarten for people to enjoy and a community marketplace featuring local artists, businesses, and community groups will be set up on the lawn as well.  Directly across the street from the house, First Lutheran Church will be offering tours of their historic building from 4:00-7:00pm.

“I got to brew my first commercially available beer with Ca$h Money [Theron Cash], so it is cool to be able to collaborate and participate in Block on Rock with Stone's Throw.” ~ Josh Davis, Brewer Rebel Kettle Brewing Co.

The following is the list at press time of vendors registered to participate in the Block on Rock 5th Birthday Bash on July 28th.