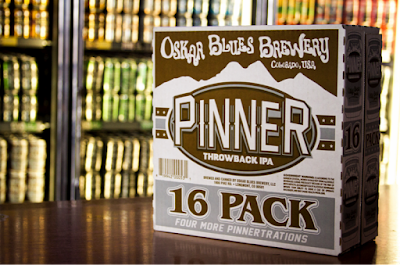 Longmont, CO - Continuing their tradition of packaging innovation Oskar Blues Brewery is adding four more pinnertrations to the existing PINNER Throwback IPA 12-packs. The new 16-can package will launch in the ColoRADo market just in time for the holiday season while national distribution will follow in early 2017.

PINNER is dry-hopped with several different heady hops, including a killer experimental variety, giving it a tropical, stoned fruit aroma with hints of pine and smooth malt in the flavor. The brewery expanded the strain by lighting up Passion Fruit PINNER for craft beer drinkers in the summer of 2016. The limited release sultry spinoff accentuated the passion fruit and citrus juice attributes of the original PINNER and cranks them up for the summer season. Look for Passion Fruit Pinner again May through August in 2017.

"Many things contribute to flavor in beer, and with Pinner it's a focus on hops and malt--with a considerable nod to the hops," said Oskar Blues ColoRADo head brewer Tim Matthews. "With the lower ABV, layers of flavor build on one another-- with one sip citrus, the next sip pineapple, next sip papaya, next sip passion fruit, next sip toasted bread--and then on to the next pint."

America's first craft beer 16-pack is a great grab-n-go package and at 4.9 percent ABV and a dry-hopped 35 IBUs, its easy to throw 'em back.

Find #PinnerIPA and #SipSipGive at your favorite watering hole or a beer shop near you with www.oskarblues.com/beerfinder.

To keep up with all things Oskar Blues, visit http://www.oskarblues.com.